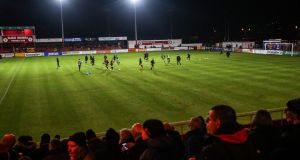 Sligo Rovers started life without Dave Robertson with a crucial win over Bohemians at the Showgrounds.

Jonah Ayunga and Michael Leahy claimed their first goals of the season, as Rovers overcame an injury-hit Bohemians, in what was interim manager Declan McIntyre’s first game in charge.

Ayunga, who was called up to the Kenyan national team last year, kept his composure after 12 minutes to slip the ball passed Shane Supple for the breakthrough.

The ball bounced kindly for the striker off a Bohs defender following a strong Kyle Callan-McFadden tackle, and Ayunga took full advantage.

Prior to that, the home fans felt Raffaele Cretaro should have had a penalty after he went over in the area, but an offside flag rendered their appeals irrelevant.

Lorcan Fitzgerald was typically dangerous from set-pieces for the visitors, and his free-kick after Michael Leahy was booked forced a decent save from Micheál Schlingermann.

Gary Boylan tested Supple at the far end, but other than that, there was little to separate the sides by the half-time whistle.

But the decisive goal came 10 minutes from time, after Rovers had survived a period of Bohs’ dominance when Leahy headed home Kieran Sadlier’s corner at the back post to secure the points.