Brendan Rodgers: ‘I was just stretching my fingers’ 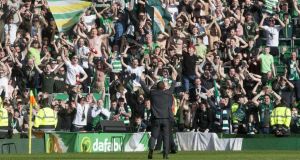 Brendan Rodgers claims he was merely stretching his fingers as he accompanied Celtic fans’ 10-in-a-row chants with both hands following the 3-1 home win over Kilmarnock.

The Parkhead club wrapped up their sixth successive Scottish Premiership title at Hearts last Sunday and the Hoops boss added to the feelgood factor at the club when he signed a new contract on Friday which takes him to 2021.

After Celtic extended their unbeaten domestic run to 39 games against Killie — Stuart Armstrong, James Forrest and Scott Sinclair scored for the home side with Jordan Jones notching for the visitors — Rodgers went out to take the acclaim of the supporters.

The Irishman, who arrived at the Glasgow club, raised both his hands as the supporters sang for what would be a record-breaking 10 successive title wins.

However, asked about it afterwards in the media room, he elicited some laughter by saying: “I was just stretching my fingers.

“It was a great day for us. It has been a fantastic week for us, having won the league and committing the next four years of my life to here.

“There is no hardship, it is an incredible club to work with.

“So the supporters are happy, they enjoy watching their team and I was applauding that.

“They have been singing it since my first day. I wondered what they were singing but that is their aim and it is my job to try to help them achieve it.”

Celtic, with 29 wins and three draws in the league, moved on to 90 points with six games remaining and a Scottish Cup semi-final against Rangers to play in two weeks’ time.

Rodgers said: “The crowd enjoyed it. They really understand now what we are doing.

“You are playing against a team that are sat in. It is very very tough, especially at the beginning, to break that down.

“But we showed patience, we showed quality, worked the ball really well in tight spaces and got the goal.

“The only disappointment was defending the counter-attack, the goal we conceded.

“But in the main the counter-press and everything I want from a team playing with that lovely little arrogance and charisma with the game (was there).

“We always looked exciting and looking like we can score goals and defended, in the main, very well.

Kilmarnock missed out on a top-six spot to Partick Thistle — who beat Motherwell 1-0 at home — but interim boss Lee McCulloch had no complaints about the defeat by the champions.

He said: “We have good games still ahead and we have some important ones too.

“Celtic’s first goal came from a deflection and I felt for keeper Freddie Woodman.

“Then we got a deflected goal and started to get a bit of momentum, but we switched off at a set-piece.

“That was the most disappointing aspect of the day. We were sloppy at a simple free-kick.

“Overall, I have no complaints. We definitely didn’t deserve to win the game but on another day we could have stolen a point.”