Liverpool get out of jail with comeback at Stoke 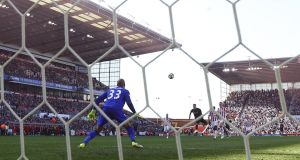 Two pieces of Brazilian magic from Philippe Coutinho and Roberto Firmino dug Jurgen Klopp out of a hole as Liverpool came from behind to beat Stoke 2-1.

The Reds’ top-four hopes appeared to have suffered a huge blow when Everton fan Jon Walters scored against his favourite opposition just before the break.

His seventh league goal — the most he has scored against any Premier League team — against the Merseysiders was scant reward for the Potters’ first-half dominance.

Klopp’s surprise decision to switch to a 3-5-2 formation with a weary Firmino alongside Coutinho, recovering from illness, on the bench de-stabilised his side and handed the initiative to their hosts.

He rectified the decision at the interval and the Brazil team-mates repaid him with a goal apiece within three minutes of each other as momentum swung the other way.

The result maintained the two-point gap to fourth-placed Manchester City and extended it to nine over Arsenal, who play the first of their three matches in hand on Monday.

A warning this was not going to be an easy afternoon came after just two minutes gone when Xherdan Shaqiri swept the ball home only to be correctly flagged offside.

Stoke dominated a Liverpool side struggling to come to terms with their new shape like no other opponent this season and the visitors found themselves penned back in their own half for much of the opening 45 minutes.

Even the loss of Joe Allen to a hamstring could not halt the Potters’ momentum as another ex-Reds midfielder Charlie Adam slotted in seamlessly.

Having shot themselves in the foot at Bournemouth in midweek Liverpool almost did it again when Dejan Lovren’s overhead clearance looped up for Marko Arnautovic to volley into the side-netting.

However, his anger increased when Stoke scored on the counter-attack with a ball inside makeshift left wing-back Nathaniel Clyne picking out Shaqiri whose near-post cross was headed in by Walters.

Woodburn may be the youngest goalscorer in Liverpool’s history but at just 17 he looked like a boy in a man’s game and despite battling to overcome a knee injury it was no surprise to see him and fellow teenager Trent Alexander-Arnold replaced by Coutinho and Firmino for the second half.

It had an instant effect, although not before Simon Mignolet saved brilliantly at close-range from Adam after Georginio Wijnaldum had inexplicably headed a Stoke corner back into the six-yard box.

Potters goalkeeper Lee Camp, a spectator for almost an hour, tipped Coutinho’s low shot tipped behind and Lovren headed the resulting corner against the crossbar as Liverpool finally woke up.

With 20 minutes to go a fit-again Daniel Sturridge was sent on for his first appearance in months and it was his attempt to reach Emre Can’s cross which saw the ball bounce back for Coutinho to smash home.

Difficult as it was his compatriot bettered that effort with a thumping first-time 25-yard volley from Wijnaldum’s pass.

Still it required more brilliance from Mignolet who somehow scrambled across his goal to keep out Saido Berahino’s close-range shot.