Cork show no sign of stopping as they break wins record 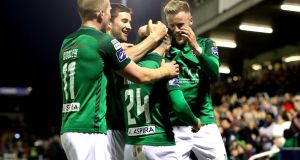 In the end, it was straightforward for Cork City as they equalled the all-time league record for consecutive wins from the start of a season at Turner’s Cross, but they were forced to be patient in seeing off Derry City.

Garry Buckley’s goal in the 35th minute proved to be the dam-breaker for John Caulfield’s side, but prior to that their play had been uncharacteristically sluggish while the Candystripes suggested that they were more likely to open the scoring.

Prior the opener, Nicky Low, Nathan Boyle and Aaron McEneff had all called Cork City goalkeeper Mark McNulty into action, with Seán Maguire’s early chance, well dealt with by Derry netminder Gerard Doherty, the only action at the other end.

Just before the half-hour, though, Cork upped things a notch as Kevin O’Connor’s curling free kick required a good save from Doherty to prevent the ball from going into the top corner and six minutes later the Rebel Army were in front.

Buckley was the scorer, netting from close range, but Stephen Dooley was the architect, doing great work on the left before producing a good low ball across, and they held that lead until half-time.

Ten minutes into the second half, the lead was doubled. From inside his own half, Gearoid Morrissey’s ball perfectly split the Derry defence, allowing Karl Sheppard to run clear and slot past Doherty.

After Mikhail Kennedy almost seized on a McNulty slip, Cork got their third, with Seán Maguire making it nine goals from nine games this season as he punished slack defending to fire home and make the points safe.

McEneff rattled the Cork crossbar late on – McNulty – got a vital touch, but Cork were never going to be shaken. They equalled the record held by themselves (1998-99) and Sligo Rovers (2013), with a chance to break it away to Bohemians next week.