Meanwhile, Drogheda pulled off a big win against Rovers while Bray beat Galway 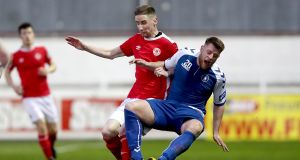 Showing no signs of their managerial upheaval during the week, Limerick dominated the first half with Saints’ keeper Conor O’Malley forced into stops from Rodrigo Tosi, Shane Duggan and Chiedozie Ogbene before they deservedly took a 26th minute lead.

Skipper Duggan put a low free kick into the St Pat’s area from the left where central defender Whitehead arrived to get a touch to flick the ball past O’Malley.

There was far more impetus to St Pat’s play on the resumption with Conan Byrne heading wide before Kurtis Byrne brought a terrific one-handed save from Clarke with a curling shot.

Limerick then had a miraculous let off on 64 minutes after conceding a penalty for a handball.

Conan Byrne stepped up, but former team-mate Clarke dived the right way to save. Ian Bermingham then saw his follow-up shot come back off a post.

Substitute O’Flynn then sealed Limerick’s win with their second goal on the counterattack on 83 minutes.

Clarke’s clearance found Ogbene who put O’Flynn through to slide past O’Malley.

A Stephen Dunne goal in injury time saw Drogheda United record a first league win at home over Rovers in 12-years and end a winless streak of six games in a riveting 2-1 victory.

The game’s first clear chance came on 20 minutes when Graham Burke beat Stephen McGuiness to the ball and deflected it into the path of David McAllister, his shot blocked by Deasy on the line.

A combination of Samuel Bone and McAllister combined to bring down Sean Thornton in the box on 30 minutes, the Drogheda native picked up the ball and sent Chencinski the wrong way.

It was end-to-end in a tempestuous start to the second-half, but despite having the better chances Rovers were unable to gain parity.

With time almost up a coming together in the box initially saw referee Rob Rogers wave away before awarding a penalty which Burke slotted home. However Thornton pumped a free into the box which evaded everyone and Dunne steered into the goal.

There had never been a score-less draw in 54 matches in all competitions between the clubs since they first met back in 1986.

That record was maintained at the Carlisle Grounds last night when Wanderers went in front in the 35th minute.

Aaron Greene flicked on for the breaking McCabe who looked to have handled as he burst into the box. His initial effort was parried by Conor Winn with the former Shamrock Rovers man prodding in the loose ball low from six-yards.

The Seasiders were reduced to ten-men just after the hour mark when skipper Conor Kenna was sent off for a second yellow.

But the Wicklow outfit hung to leap-frog Derry in the charts with fifth success of the campaign.