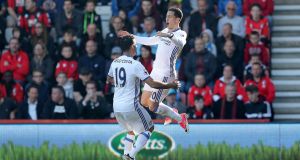 Eden Hazard’s wonderful finish carried Chelsea ever closer to the Premier League title as the Blues saw off Bournemouth 3-1 at Dean Court.

Leaders Chelsea maintained their seven-point cushion over Tottenham in all the style befitting champions-elect and now need at the most 15 points from seven matches to seal the silverware.

Diego Costa’s woeful fly-hack forced an own goal from Adam Smith to hand Chelsea the lead, before Hazard outfoxed Artur Boruc for his 14th Premier League goal of the season.

Second-placed Tottenham thumped Watford 4-0 in the early kick-off, but Chelsea met the challenge with a fuss-free victory on the south coast.

Belgium star Hazard again proved central to Chelsea’s power and panache, netting his third league goal in a week after the brace that sank Manchester City on Wednesday night.

This time last year Hazard had himself ended a whopping 355-day wait for a Premier League goal with a brace in Chelsea’s 4-1 win on April 23, 2016.

Some 12 months down the line, that annus horribilis is about to be buried away in the annals if Chelsea now swipe the title under Antonio Conte.

Whatever part Hazard played in Jose Mourinho’s December 2015 sacking, however hurtful Chelsea’s 10th-place finish last term, all that will pale away on receipt of this season’s league crown.

Costa’s goal drought might have stretched on, but the bullish hitman still had a direct influence on the outcome.

The Spain striker evaded two defenders with a neat turn and his nastily scuffed strike on goal was so badly sliced as to deflect off the sliding Smith’s head and bounce home past a stunned Boruc.

Less than three minutes later Chelsea swapped the slapstick for the stupendous, as Hazard conjured a finish of the highest quality.

The Belgium playmaker latched onto N’Golo Kante’s through-ball, raced clear and then bamboozled Boruc with a sumptuous feigned shot.

Hazard shaped to strike with his right foot but instead dragged the ball round the Cherries keeper before slotting home from a slender angle with his left.

But just when Chelsea thought they could coast home, Bournemouth hit back.

Benik Afobe was desperately unlucky not to score from a smartly controlled volley from Charlie Daniels’ cross.

The 24-year-old’s neat effort not only clattered the post but also struck Thibaut Courtois on the rebound before somehow dropping to safety.

Emboldened back onto the attack, the hosts duly halved the deficit thanks to King’s persistence.

The Norway forward lashed a hopeful effort from 20 yards and was rewarded for his graft as a deflection saw the ball sail past Courtois.

Chelsea were forced to absorb yet more home pressure after the break, but crucially held firm.

And when Alonso whipped a left-footed free-kick over the wall and into the net, the deal was done.