Antoine Griezmann rescues a draw for Atletico in Madrid derby 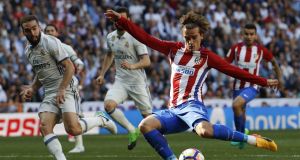 A late equaliser from Antoine Griezmann earned Atletico Madrid a 1-1 draw against city rivals Real Madrid at the Bernabeu.

During a tense opening 45 minutes Cristiano Ronaldo saw his effort headed off the line and Griezmann forced a good save from Keylor Navas.

Real broke the deadlock early in the second half when Pepe nodded in a free-kick from Toni Kroos.

That had looked to be enough to secure victory, but Atletico, who have won at the Bernabeu for the last three seasons, hit back when Griezmann slotted in with just five minutes left as the spoils were shared.

Real came into the match with a two-point lead at the summit and with a game in hand on all their rivals, while Atletico were 10 points adrift of their neighbours in third and knowing a defeat would likely spell the end of their slim title hopes.

And it was the visitors who created the first opening when Koke sent in a free-kick which Saul Niguez headed just wide.

It took almost quarter-of-an-hour for Real to create some danger, as Ronaldo cut inside and fired in a low shot which Jan Oblak saved to his right.

Atletico were doing well to shackle the threat of Gareth Bale, who was recalled to the starting XI having sat out the midweek 4-2 win at Leganes.

Oblak was again alert to deny Karim Benzema before Real came close to taking the lead after opening Atletico up after 30 minutes.

Luka Modric latched onto a stray pass and picked out Ronaldo, whose shot beat the Atletico keeper, only for Stefan Savic to nod the ball clear from under the crossbar.

Oblak was soon in action again, the Slovenian alert to save Bale’s header.

Atletico, though, remained dangerous on the counter-attack, as Griezmann made the most of a loose pass from Sergio Ramos and sent a low shot goalwards which Navas pushed behind at full stretch.

Real came out for the second half with renewed purpose, and Ronaldo could have broken the deadlock only to nod wide from Marcelo’s cross.

The Portugal forward then turned provider for Benzema, sending a cushioned header back across goal from the far post for the Frenchman, but Oblak was out quickly to make a superb reaction save at point-blank range.

Real eventually swept into the lead after 52 minutes.

Germany midfielder Toni Kroos floated in a free-kick from the left towards the far post where Pepe got above Juanfran Torres to send a looping header back into the bottom corner past the dive of Oblak.

Real defender Dani Carvajal then fired his shot over the crossbar, with the Bernabeu faithful in full voice.

Despite their dominance of possession, Real were hit on the break as the hour mark passed.

Yannick Carrasco sent Fernando Torres clear into the penalty area, and Navas had to come racing off his line to stop the Atletico frontman from slotting in an equaliser.

Atletico manager Diego Simeone made a change when Angel Correa came on for Saul before Pepe went off, having looked to have picked up an injury in an earlier collision, and was replaced by Nacho Fernandez.

After 74 minutes, Griezmann produced a superb overhead kick as the ball was floated into the Real box from the right, which Navas deflected away, but the offside flag had gone up against the Frenchman.

Real coach Zinedine Zidane looked to freshen up his side for the closing stage as Isco replaced Kroos, while there was soon another tactical switch by Atletico when Torres trudged off as Ghanaian Thomas Partey was sent on.

With nine minutes to go, Bale was substituted for Lucas Vazquez as the home side looked to change things in their frontline.

However, it was Atletico, who will take on Leicester in the quarter-finals of the Champions League, who made the telling chance when Correa played Griezmann into the left side of the Real box, and the Rojiblancos’ leading scorer slammed a low shot past Navas.