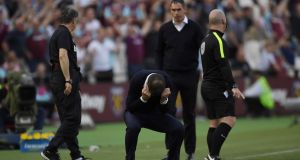 The midfielder picked a timely moment to score his first Premier League goal of the season to sink Swansea.

Bilic has been feeling the heat after five straight defeats left West Ham in serious danger of being sucked into the battle at the bottom.

A sixth loss would have left them just two points ahead of Swansea, and possibly signalled the end for Bilic, but instead they can breathe easier after moving eight points clear of the drop zone.

For Swansea, a fifth consecutive away defeat leaves them in 18th, although they will at least be heartened by Hull losing at Manchester City to keep them in what increasingly appears to be two-horse race to avoid the last relegation spot.

Bilic was given another vote of confidence before the match by joint-chairman David Sullivan, who said the board have “100 per cent faith” in the Croatian.

In a lively encounter, Fabianski saved from Ayew and Calleri drilled a good chance into the sidenetting as West Ham sought a second.

But Swansea had their chances, too, with Luciano Narsingh firing wide and James Collins hooking Jefferson Montero’s cross from under the crossbar.

So the relief was palpable at the final whistle as West Ham finally celebrated a victory, and one which could be vital for Bilic.

The pair combined to earn a deserved win for the Saints during a pedestrian game which only briefly came to life.

Saints closed the gap to Albion to four points — and they have two games in hand as the teams battle for eighth spot.

But Claude Puel’s side only secured back-to-back wins thanks to goalkeeper Forster, who denied Craig Dawson and Jonny Evans in stoppage time.

In contrast, Albion were condemned to a second straight defeat and they have won just once in their last six games as their attempt to break the 50 points barrier for the first time in the Premier League continues to stutter.

The hosts rarely looked like scoring until the end — but found Forster in inspired form.

The winning goal came out of the blue, with Nathan Redmond, Shane Long and Dusan Tadic all involved as Tadic teed up Clasie to drill just his second goal of the season from the edge of the area.

The Clarets keeper somehow managed to keep out the Spaniard’s 67th-minute effort to preserve his clean sheet and assure his side of just a fourth league point on the road this season.

However, Heaton’s heroics left Boro, who are now without a league win in 14 attempts dating back to December 17th, in ever deeper trouble with just seven games remaining.

Having emerged from clashes with relegation rivals Swansea and Hull in fixtures which had been ear-marked as life-savers with only a point to show for their efforts, Steve Agnew’s men knew they were drinking in the last chance saloon. And things didn’t get any better on Saturday.