Chelsea confirm Timo Werner signing but they are not done spending 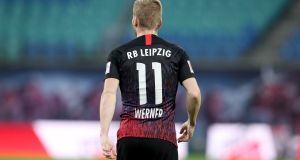 Timo Werner of RB Leipzig has completed his transfer to Chelsea. Photograph: EPA

As statements of intent go Chelsea’s signing of RB Leipzig’s Timo Werner, confirmed on Thursday, is the clearest signal yet of their determination to rub shoulders with Europe’s elite again. A striker coveted by Bayern Munich and Liverpool will be wearing a blue shirt next season and, while Frank Lampard’s side still have to make sure they can offer their newest addition Champions League football, it is hard not to feel that Chelsea’s ruthless touch is returning after a tepid few years in the transfer market.

The mood has changed. Six months ago Lampard cut a frustrated figure. He made it clear that he wanted attacking reinforcements after Chelsea’s transfer embargo was halved in December and struggled to hide his disappointment when nobody arrived in January. A team low on creative inspiration following the sale of Eden Hazard to Real Madrid needed an injection of class and Lampard’s concerns looked justified when Bayern won 3-0 at Stamford Bridge in February.

Chelsea have not made it past the last 16 of the Champions League since 2014 and are unlikely to improve that record when they visit Bayern for the second leg in August. Even so the growing sense is of a club on the up again, with the recruitment department and the head coach on the same wavelength and Roman Abramovich willing to provide funds to land key targets. Shortly after that quiet deadline day Chelsea agreed a £37m deal to sign Hakim Ziyech from Ajax in the summer and now they have pulled off another coup, sharpening their attack after winning the race for Werner.

“It is a very proud moment for me to be joining this great club,” Werner told Chelsea’s website, which said he would link up with the squad in July, subject to a medical. That means, as anticipated, he will not play in the Champions League for Leipzig. Werner predicted “a very successful future” at Stamford Bridge.

Whereas Bayern and Liverpool dithered, Chelsea pounced. They have paid £47.5m for Werner and, with the coronavirus pandemic potentially affecting budgets at other clubs, see an opportunity to make some decisive leaps. They have not used the £105m received for Hazard, Atlético Madrid are due to spend £48.5m to make Álvaro Morata’s loan permanent and further sales could boost the budget. All being well more new faces will follow Werner and Ziyech. Lampard wants Kai Havertz – a tricky one to pull off given that Bayer Leverkusen want at least €100m (£90m) for the 20-year-old winger – and likes the Leicester City left-back Ben Chilwell.

It could come down to choosing between Havertz and Chilwell. Both will be costly. Leicester are tough negotiators and although Chilwell fancies the move, Ajax’s Nicolás Tagliafico and Porto’s Alex Telles are cheaper alternatives at left-back.

The most inexperienced manager in the Premier League has made some shrewd moves so far. He was wise to move on quickly after venting on January 31st and has protected his relationship with Marina Granovskaia, the powerful director. He played a key role in landing Ziyech, the gifted Moroccan playmaker, and also laid on the charm when it came to nabbing Werner, whose 31 goals in all competitions this season mark him out as one of the finest forwards in Europe.

Ziyech has said that Lampard bombarded him texts to convince him to join, an approach that Werner will recognise. Before lockdown Lampard and Petr Cech, appointed as the club’s technical and performance adviser last summer, met Werner in Germany. They laid out their plans and struck up a rapport with the 24-year-old.

Sources have said that Cech has been heavily involved in the deal. Cech and Lampard, teammates for a decade, combined to convince Werner. After a season of frustration in the final third, Chelsea have their marquee forward – a player capable of playing through the middle or of the left, with the ability to operate alone or in a two and the awareness to take and create chances. Although they could do with more oomph in central defence, there is no doubt that buying Werner is a step in the right direction.

The German’s versatility will allow him allow him to play as a lone forward or work in tandem with Tammy Abraham or Olivier Giroud, and he keeps going when he misses chances. Werner comes back for more – no doubt there will be plenty of opportunities with Ziyech in midfield – and his determination to hit the ground running can be seen in his willingness to move to London in July and miss Leipzig’s Champions League quarter-final.

It is a coup for Lampard, who inherited a squad in need of renewal last summer. He has given the kids a chance but Chelsea need more conviction. Although they have impressive options in central midfield, an overhaul is overdue in other positions. Willian and Pedro, both of whom are out of contract on June 30th, are coming to the end. There are doubts over Ross Barkley, Marcos Alonso, Jorginho, Emerson Palmieri and Michy Batshuayi. Tiémoué Bakayoko, a dud signing, has no future at the club.

Chelsea must work hard to catch Liverpool and Manchester City at the top of the league. Callum Hudson-Odoi and Christian Pulisic, young wingers with potential, are unproven. Mason Mount is learning and Ruben Loftus-Cheek is on his way back from a serious injury. Lampard should not settle if there are big deals to be done. Havertz, an apparent target for Bayern, Madrid, Liverpool and United, would enhance his side’s threat.

Do not rule out Havertz. Chelsea mean business. They have short-term targets to meet, a place in the top four to protect, but Lampard wants trophies. The spending is unlikely to stop with Werner.