Ireland to face Slovakia in Euro 2020 playoffs on October 8th 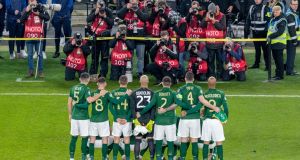 Ireland’s Euro2020 playoff semi-final away to Slovakia has been confirmed by Uefa for October 8th with the any final pencilled in for November 12th. Both fixtures would kick off ‘triple headers’ of games for Stephen Kenny’s side.

The Nations League campaign now looks set to kick off as originally planned with a trip to Bulgaria on September 3rd followed by a home game against Finland three days later. Ireland’s games in the competition scheduled for October and November will be put back by at least a day because of the playoff matches having to be accommodated but will go ahead very much as announced.

Those in October at home to Wales and away to Finland, now look set to be played on the 11th and 14th respectively, 24 hours later than originally envisaged. The November group fixtures away to Wales then at home to Bulgaria seem to be on course for the 15th and 18th respectively; two days later than initially planned.

Uefa had yet to confirm those precise dates for the Nations League games in October and November on Wednesday evening but the Ireland manager said he was still happy to know an awful lot more about what he needs to be planning for after the summer.

“It is good to have clarity now,” said Kenny. “Bulgaria away and Finland, at home, will be our first two fixtures in the new international season and these Uefa Nations League games are very important games in terms of World Cup rankings and potential playoffs and also as preparation for the Euro 2020 playoff against Slovakia in October.

“I am also pleased that we will get two competitive games in September to help us in our preparations before the playoff against Slovakia.”

As for October, he added: “It’s unique to have three internationals in one window – and two of them away – but our main focus will be on that Slovakia game. We have already been planning for all the games later this year and now that we have definite dates for all the fixtures, we can plan with more detail.”

The number of fans allowed to attend games will be dictated by local restrictions at the time with Uefa saying that they will monitor the situation in the run up to the fixtures, while being guided by the public health authorities and regulations in the different countries involved. The FAI is hoping to have around 18,500 at the game against Finland.

All 12 host cities will stage matches as planned at next summer’s rescheduled Euro2020 with the tournament kicking off on June 11th and the four matches in Dublin taking place on June 14th, 18th, 23rd and 29th.

Speaking after a meeting of Uefa’s Executive Committee on Wednesday, the organisation’s president, Aleksander Ceferin and other officials confirmed that this season’s Champions League will be completed between August 12th and 23rd in Portugal by way of an eight-team tournament with the Europa League and Women’s Champions league to be finished up broadly similar fashion in Germany and Spain respectively.

The list of host cities for the next few finals in both competitions has essentially been redrawn with everything put back one year but the Super Cup remains more or less unaltered and so Belfast will still get to stage the game in 2021 as originally planned.

Ceferin said that a decision will be taken ahead of the draw for the club mini-tournaments this summer as to how many, if any, fans will be allowed to attend the various matches.

“We don’t know now if only local fans, or no fans (will be able to be in the stadiums) or whether fans of the clubs will be able to travel,” said Ceferin. “If we were to decide now then we would hold the games with no fans but the situation is changing every day and we will decide before the draw.”

Newly installed Under-21 Ireland manager Jim Crawford will have to wait another few weeks, it seems, for confirmation of when his side’s remaining qualifying games against Italy. Iceland and Luxembourg will be played but the European club competitions will kick off for Irish sides on August 18th or 19th when Dundalk take part in the first qualifying round of the Champions League.

The preliminary stages of both it and the Europa League will, it has been confirmed, be comprised of one leg ties with the venue for the single matches to be decided at the time the draw is made.

If Dundalk are successful then they will be back in action the following week when Shamrock Rovers, Bohemians and Derry City will also be involved in the Europa League. There will then be a break for the international window before the competitions resume in mid-September.

The playoff round of the Champions League will be played over two legs, as normal, and the group stages of both tournaments will get underway in October.

In the women’s competition, Peamount United will feature in a mini tournament between October 7th and 13th with the club finding out who they are to face in early September.

1 Tipping Point: DeChambeau’s transformation raises questions, but who will ask them?
2 Super Rugby AU offers glimpse of rugby’s future if law changes are adopted
3 Pete Sampras: The forgotten great with the best serve in the business
4 Game Changers: Vincent O’Brien, a pioneer who took Irish racing to the world
5 Skerries 100 race goes ahead after William Dunlop killed in crash
Real news has value SUBSCRIBE
Crossword Get access to over 6,000 interactive crosswords