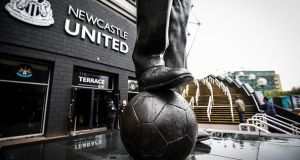 That figure is £50m more than the price agreed with Newcastle’s owner by a consortium involving Saudi Arabia’s Public Investment Fund and supported by Reuben Brothers and Amanda Staveley.

With Ashley having exchanged contracts with the largely Saudi-funded consortium and received a non-refundable £17m deposit, the new bid remains, for the moment at least, strictly academic. The only way Mauriss’s offer could succeed is if the Premier League does not approve the deal it has been considering for the best part of three months.

Should the Saudi-led proposal fail the league’s owners’ and directors’ test, Mauriss – the 56-year-old, Los Angeles-based chief executive of Clear TV who is understood to believe he could take control of Newcastle as early as September – would be free to finalise a fresh agreement to end the sports retail tycoon’s 13-year ownership of Newcastle.

The emergence of this backup plan in the event of the Saudi buyout falling through appears conveniently timed to put pressure on Richard Masters, the Premier League’s chief executive, to make a decision.

Masters’ dilemma is that the Saudi involvement has been shrouded in controversy, prompting objections from human rights groups including Amnesty International and concerns about television broadcast piracy. On Tuesday a World Trade Organisation report found damning links between Saudi Arabia and the facilitation of such piracy, although there was no specific reference to Newcastle or PIF.

Yet given that prince Mohammed bin Salman is chairman of PIF, the Premier League has been investigating links between it and the illegal streaming of Premier League matches. With Qatar’s beIN Sport having a £500m overseas broadcast rights contract with England’s top tier the issue is particularly sensitive and has delayed the league’s decision on whether to approve the Newcastle takeover.

The WTO report found that “prominent Saudi nationals” promoted illegal broadcasts by the pirate network beoutQ, contradicting the Saudis’ previous claims that the platform, which used footage beIN, operated outside their sphere of influence.

Newcastle have said nothing about the takeover throughout the process and declined to comment on this latest development.