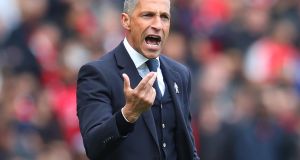 Chris Hughton during his time as Brighton manager. ‘When the game is played by such a high percentage of black and ethnic minority players and we’re looking at the percentage of managers and coaches, at the top level it is minimal.’ Photograph: Catherine Ivill/Getty Images

Chris Hughton is midway through an answer about the lack of black managers at the top of English football when he stops and draws on a quote from Karun Chandhok, the ex-Formula One driver. “He was talking about the things that Lewis Hamilton has said about racism,” the former Brighton manager says. “One sentence that hit me was: ‘It’s not enough to be non-racist – be actively anti-racist.’ What it says to me is that if we accept that racism has existed in the game then we have to do something about it.”

When Hughton was sacked by Brighton at the end of last season, it meant that Wolves’ Nuno Espírito Santo was the only manager from a black, Asian and minority ethnic background in the Premier League. There are only six employed at the 91 clubs in the top four divisions and, judging by Raheem Sterling’s Newsnight interview on Monday, patience has run out. Sterling has been a powerful anti-racist voice in the past two years and his latest comments, in the wake of the Black Lives Matter protests that have followed George Floyd’s killing by police in Minneapolis, have struck a chord with Hughton.

“When the game is played by such a high percentage of black and ethnic minority players and we’re looking at the percentage of managers and coaches, at the top level it is minimal,” the former Newcastle and Norwich manager says. “At grassroots and academy level there are certainly more black and ethnic minority coaches, but at the top levels it’s still very sparse. The fact Raheem has spoken shows it is something he sees.

“My experiences would be different to others. Ossie Ardiles got the job at Tottenham. I knew Ossie well and he brought me back as his reserve-team coach. That was my intro into coaching. Over the years I have known lots of other potential coaches who couldn’t see a pathway. They couldn’t see role models. There were so many BAME coaches who would apply for jobs and not even get an interview. So many wouldn’t even get replies.”

The game has an opportunity. I know there have been false dawns in the past but the feeling with this is not going to go away for the time being

Floyd’s death has sparked outrage across the world. It has become more than an American issue. Britain, a country where the Windrush deportation scandal was possible, has its own past to confront. On Sunday, demonstrators in Bristol toppled a statue of the 17th-century slave trader Edward Colston. Old wounds remain open and it should surprise few that football is not immune from societal inequality.

“When I was a player the mentality was black people would make good players but weren’t captain material or managerial material,” Hughton says. “That stereotyping existed. Racism doesn’t go overnight. It’s over a period of time and education. Some things stick. Do I think those stereotypes still exist? I do.”

Sterling pointed out how Steven Gerrard and Frank Lampard, who have landed top roles at Rangers and Chelsea in the early stages of their management careers, have found it easier to get good jobs than Sol Campbell, who is at Southend. “Are we talking about unconscious prejudice?” Hughton said. “To get that out of everybody’s DNA takes a long time. For some it will never happen. But as much as we talk about unconscious profiling, one thing that does exist are the facts.”

Hughton, who wants to get back into management, does not see enough diversity at the top of the Football Association. He commends the FA for ensuring that one BAME coach is associated with each England age group but believes there is more to achieve. “If you are looking at the make-up of our stakeholders and they are without ethnicity, it doesn’t make things easier,” he says.

“There is no doubt that our stakeholders have a responsibility. We have to set things in place to encourage more BAME coaches to want to take their badges. In time the big organisations will be under more pressure to make sure they have an inclusive workforce and board. Our FA and Premier League need to be seen to be inclusive of the workforce. There has to be more pressure on our stakeholders to prove that they are more inclusive.”

Hughton (61) has experienced racism. He became the Republic of Ireland’s first black player in 1979. When he was younger, he had to learn to control his emotions. What he admires in today’s generation, however, is the refusal to accept the status quo. “If I’m looking at the protests at the moment and wondering if it will change things, the answer is yes,” Hughton says.

“One thing I absolutely applaud is that Raheem is not alone. These players have a platform. I’ve seen the likes of Trent Alexander-Arnold speaking out and the Liverpool team going down on one knee before training. Where does the pressure on organisations come from? It comes from enough voices and enough dissatisfaction. A lot of those marching are young individuals. The fact they are seeing what a lot of people have seen for many years is encouraging. It’s going to be about pressure applied.

“I think black players have been the most vocal because they have had those experiences. What I saw from Liverpool was powerful and I would applaud any organisation or club that felt the same. I think it would be more powerful if it came from white players as well. But it would be more powerful if it came from the game as a whole. The game has an opportunity. I know there have been false dawns in the past and stances which have lost momentum but the feeling with this is not going to go away for the time being. Our organisations have a good opportunity to be part of change.”

Hughton says there must be visible action. Last year the EFL implemented the Rooney Rule, compelling clubs to interview at least one BAME candidate when hiring a first-team coach. “I would have no doubt that a lot of people would use it as a sticking plaster – ‘I will interview at least one BAME person for the job because I have to’,” Hughton says. “But in theory I do agree with the Rooney Rule. It’s a step. What I would rather have of course is for everybody to use it in the right way. I think some will and some won’t.

“This has to lead to BAME individuals in positions of real authority . . . There has to be a real desire to make that change.” Guardian

Shamrock Rovers crowned champions after Finn Harps beat Bohemians 21:47
Croke Park back open for business as Dublin gain Laois revenge 21:37
Hugo Keenan and Will Connors: The best of friends, the best of debuts 21:09
Ireland women’s shake off the rust to beat Italy 21:09
Man United and Chelsea play out drab draw in the driving rain 19:54