While first match back offered little, the taking a knee gesture proves striking

Aston Villa and Sheffield United restarted the Premier League after a 100-day hiatus caused by the Covid-19 health crisis with a strong statement of support for the worldwide protests against racism. Video: Reuters 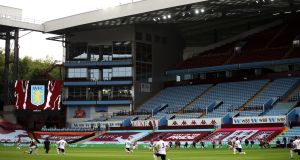 The Premier League is back, we’ve 90 games over the next 39 days. Photograph: Carl Recine/PA Wire

“It’s like Christmas day, innit,” said a beaming Jamie Redknapp, the 100-day Premier League drought ending with the clash of Aston Villa and Sheffield United, a contest he, no more than ourselves, might possibly not have envisaged being the most eagerly anticipated game of the season when the fixtures were released back in the day.

But we are where we are, so for Jamie this was akin to finding a train set, a Scalextric, Stretch Armstrong, a bow and arrow, and a football-themed Fuzzy Felt under his tree all on the same Christmas morning, Santa’s generosity knowing no bounds. And with 92 games being played. over just 40 days, Santa’s the gift who doesn’t know when to stop giving.

David Jones had welcomed us to the return of the Premier League with one of those Sky montages that leaves you weeping in to your cheesy nachos and puts your heart through the shredder, featuring, as it did, lots of sad small people kicking balls in their back gardens during lockdown, over a melancholic but soon-to-soar soundtrack, in an effort to fill the gap left by the absence from their lives of the Premier League.

“Football fell silent ... we were dreaming of better days to come ... the waiting is finally over ... the moment has come to restart our national game,” was the gist. By now, the cheesy nachos were drowning.

“And what a game to return to,” said David of Villa v Sheffield United, like it was 1970 Brazil v Italy, George Baldock, Oliver Norwood and Anwar El Ghaz the Carlos Alberto, Jairzinho and Pele of the day that was in it.

In the end, though, they couldn’t welcome us back with a goal, the game finishing 0-0, although strictly speaking Sheffield United did manage to score, which briefly, eh, silenced the home crowd, but the ref’s GDS (goal decision system) watch didn’t buzz when the ball had clearly crossed the line, VAR inexplicably not called upon in what was a WTF moment.

It was the worst football-related error of the day, if you set aside Secretary of State for Health Matt Hancock saluting “Daniel” Rashford for his campaigning awesomeness, the ref getting dog’s abuse from the Sheffield United fans who popped up on Sky’s screen via Zoom, all 16 boxes hopping in rage. We’ll get used to this one day. Maybe.

Those of us who own Fitbits, though, could sympathise with Michael Oliver, knowing, as we do, that wrist-gadgets are utterly unreliable lying buggers, like those days when you’re told you only burnt 12 calories despite several return trips to the peanut butter cupboard.

If the game offered nothing of note in a footballing sense, that moment the players, and ref, took a knee after the whistle sounded to start the proceedings, was a striking one.

Just a gesture, true, but allied to the pre-match debate among the Sky crew about the Black Lives Matter movement, and the ads they ran promoting it, as well as Gary Neville’s chat with Raheem Sterling on the issue, you couldn’t but think Sky, at least, has grown up a bit. After all, it seems but a wet week ago – last December to be exact – when Jones shut Neville down when he attempted to discuss the monkey chants directed at Chelsea’s Antonio Rudiger by Spurs fans.

Aston Villa old boy Ian Taylor, on Sky duty at Villa Park, was encouraged, but couldn’t but note that he’s seen it all before. “We’ve seen demonstrations from Martin Luther King days,” he said, “and nothing has changed.” He wanted a little more, then, than gestures.

Back with the football and the chief challenge for the viewers was whether to watch the game with “augmented” crowd noise on one Sky channel, or opt for “natural stadium sound” on another, eg “facking ’ell Grealo, you can’t fackin’ shoot from there”.

Neither was satisfactory, to be honest, but the moment this couch chose natural stadium sound was when the virtual Villa supporters celebrated like they’d scored a late winner in a Champions League final when their own Douglas Luiz was booked for upending Oli McBurnie. The man with his finger on the sound effects button had hopelessly malfunctioned.

But never mind, it’s Christmas, the Premier League is back, we’ve 90 games over the next 39 days. We’ll be locking ourselves down all over again.

1 Gerry Thornley: After 32 weeks the Six Nations is back up for grabs
2 Extremes of sweet and sour for Solskjaer as Man United show signs of revival
3 Johnny Sexton aware of how Ireland can offer fans an escape
4 Arsène Wenger: Arsenal was a matter of life and death to me
5 Stockdale and Ringrose on board with expansive Irish game plan
Real news has value SUBSCRIBE