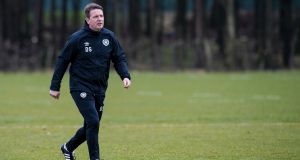 Daniel Stendel is may leave the club after their relegation. Photo: Craig Williamson / SNS Group via Getty Images

Hearts have started legal action against the Scottish Professional Football League after the collapse of reconstruction talks sealed their relegation from the top flight.

The club will pursue several million pounds worth of damages from the SPFL, a matter amplified by the 2020-21 Championship being reduced to a 27-game season. Legal challenges to the abandonment of league seasons in France and Belgium have also strengthened Hearts’ resolve.

Hearts were four points adrift with eight fixtures to play when coronavirus halted the season. A subsequent, highly controversial SPFL vote allowed its board to determine placings as final. After that transpired, expanding the Premiership from 12 to 14 teams was widely discussed but never thought likely to receive the necessary level of support. That route was formally shut down by the SPFL on Monday, with Hearts wasting no time in confirming their next step.

“Now that all other avenues are closed, we are left with no choice but to proceed with a legal challenge,” Hearts said. “The club has tried throughout these last few months to avoid this course of action but we must now do the right thing by our supporters, our employees, our players and our sponsors, all of whom have been unwavering in their commitment and support. We can hold our heads up high as we have acted at all times with integrity, common sense and with the best interests of Scottish football at heart.

“While many weeks have been wasted in trying to find a solution, we must now formally challenge this outcome. The club can confirm that the necessary steps have been taken to begin this legal challenge. Given that this is now an active legal matter, the club will be offering no further comment at this time.

“To our amazing fans we say that we cannot, and will not, sit idly by and watch the decisions made in the past few months further damage Heart of Midlothian Football Club. Thank you for fighting for us, now allow us to do the same for you.”

Partick, removed from the Championship on a points-per-game basis despite being two adrift of Queen of the South while holding a game in hand, are expected to update their supporters soon.

Hearts said they were “disappointed, yet sadly not surprised” league reorganisation had failed. “We thank those who were open-minded, pragmatic and willing to come together to try and reach a fair outcome for all. Sadly, there were too few of us.”

The on-field byproduct is the likely and imminent departure of Daniel Stendel as head coach. John Robertson, the club’s record goalscorer, and Neil McCann will be the leading candidates to replace the German.

The SPFL said 16 of its 42 clubs offered indicative support for a 14-team Premiership, as that would have added Kelty and Brora to League Two to maintain the overall figure.

League One, where Partick are now destined, has no current start date. – Guardian

Johnny Murtagh to train for the Aga Khan in Ireland 16:40
Salwa Eid Naser cleared of anti-doping violation by World Athletics 16:38
Longford hand Cork a walkover in final Division 3 match 15:57
Johnny Sexton aware of how Ireland can offer fans an escape 15:34
Jason Holder ‘disappointed’ in Australia and Pakistan for not taking the knee 13:17

1 Gerry Thornley: After 32 weeks the Six Nations is back up for grabs
2 Johnny Sexton aware of how Ireland can offer fans an escape
3 Extremes of sweet and sour for Solskjaer as Man United show signs of revival
4 Stockdale and Ringrose on board with expansive Irish game plan
5 Arsène Wenger: Arsenal was a matter of life and death to me
Real news has value SUBSCRIBE
Crossword Get access to over 6,000 interactive crosswords