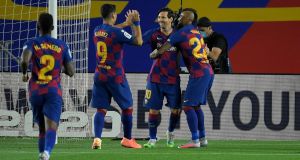 Lionel Messi celebrates with his Barcelona teammates after after the Catalans beat CD Leganes on Tuesday. Photograph: Getty Images

Spanish football’s international viewing figures have increased by over 48 per cent since the season returned after being halted for three months due to the Covid-19 pandemic, organising body La Liga said on Thursday.

Citing a study by analytics firm Nielsen Sports of the first round of matches since the campaign resumed on June 11th without fans, La Liga said its biggest audience bounce came in Africa, where it received a 73 per cent boost in viewers.

Viewing audiences increased by 72 per cent in Asia, where La Liga has had a free-to-air deal with Facebook in the Indian sub-continent since 2018.

In Europe, audiences swelled by over 56 per cent, with the biggest spike (130 per cent) coming from Belgium, which cancelled its domestic season due to the pandemic.

The league’s domestic viewing figures experienced a more modest increase of 12 per cent.

The most popular match was Real Madrid’s 3-1 win over Eibar, a league spokesman said, followed by Barcelona’s 4-0 victory over Real Mallorca and Sevilla’s 2-0 triumph over city rivals Real Betis, the first match since the season resumed.

“We feel privileged to be able to take to the field again, and we’re very happy to have the opportunity to offer live sports entertainment at a time when there are few events like this around the world,” said La Liga’s president Javier Tebas.

“We hope that other competitions in other regions will also start soon, because it’s important for the fans and the industry.”

Oscar Mayo, director of marketing and international development for the league, added: “We’re very pleased with the exponential growth in the figures for La Liga’s international audience.

“We knew that fans around the world were keen to enjoy the excitement and entertainment we offer.”

Spain is one of the worst affected countries in the world with over 27,000 deaths due to the novel coronavirus and 245,000 infections.

It was able to get its season back up and running thanks to a joint effort from La Liga, Spain’s soccer federation and the government’s department for sport.

The Spanish top-flight is the second of Europe’s top five leagues to restart after the Bundesliga, which also posted record audiences in its first weekend back last month.

England’s Premier League resumed on Wednesday while Italy’s Serie A returns on Saturday.

Second Waterford FC player to undergo testing after reporting Covid-19 symptoms 21:15
Crowd limits to remain at 200 as Government stalls move to phase four 21:15
Ryan Brennan secures the points for 10-man Shelbourne in Donegal 20:18
Defending champion Rafa Nadal pulls out of US Open due to coronavirus concerns 20:40
GAA offer €40 refund after all intercounty season tickets are cancelled 18:51