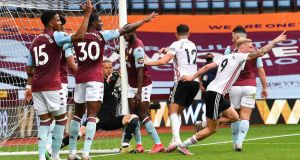 Aston Villa’s goalkeeper Orjan Nyland appears to carry the ball over the line but the goal was not given during their Premier League clash with Sheffield United. Photo: Paul Ellis/NMC/AFP POOL

How heartening after three months of lockdown, death and strife to have something so trivial to argue over as a disallowed goal in a 0-0 draw. Welcome back, Premier League.

Of course the key detail here was not trivial in a football sense and, actually, there is no argument about whether it should have stood: the ball definitely crossed the line, the problem arose because the reputedly infallible goalline technology did not confirm that. Given the strangeness of this match’s context, it was a fittingly odd development. It was also an embarrassment the Premier League should have avoided in possibly its most anticipated fixture of all time.

The non-goal came just before half-time in a match of impressively high intensity given the context and, if it had been permitted, it would have boosted United’s European qualification aims and plunged Villa deeper into relegation trouble. Ollie Norwood fizzed an inswinging free-kick over from the left wing and the home goalkeeper, Orjan Nyland, stretched to catch it but his momentum and a collision with a defender took him backpedaling over the line and crashing into the sidenetting. He took the ball with him.

United players celebrated what they believed to be an obvious goal. But the referee, Michael Oliver, waved play on, dismissing protests by pointing to his watch to indicate it had not buzzed to confirm all of the ball had crossed the line. Moments later the referee blew for an infringement against Villa – and that brought an end to the passage of play, which is why, according to the Premier League, the decision was not allowed to be referred to VAR.

The exasperation was plain on the faces of Sheffield United staff watching on a monitor on the sidelines.

Until that point the game had been tight and entertaining. Of course it was not the same as before. The first thing you noticed was what was missing. This was the Premier League Unplugged. No giddy throngs enlivened the stands before kickoff, no chanters or hawkers or hoopla. Nor even much chat. Just a drib-drab of club staffers and journalists, all waiting for the emergence of two squads of players who hoped to perform like superstars in a setting half-way between a Sunday League wilderness and a top-end film studio.

By the time the players emerged for their warm-ups, the thunder and rain had subsided and the sun pierced the clouds to spread a little light. Which, ultimately, is also what the football was here to do.

For the teams this was about more than a morale boost. It was a critical duel, the match they had in hand over the sides around them at opposite ends of the table. To the question about what has changed over the last three months, they hoped to give contrasting answers: the Blades planned to play the same as they had done before the forced pause, whereas Villa aimed to show evidence of serious change after the “refocusing and resetting” that Dean Smith spoke of doing during the shutdown.

Smith made some bold choices with his team selection, including the decision to pick Nyland in goal ahead of Pepe Reina. He also gave a first league start of the season to Keinan Davis up front, deployed Ezri Konsa at right-back in a four-man defence and gave the fit-again John McGinn a first appearance for six months.

Chris Wilder, meanwhile, saw his continuity plans sabotaged by injuries to Jack O’Connell and John Fleck. The former as replaced by Jack Robinson, appearing in the league for the first time since joining United for free in January.

Davis made life uncomfortable for the visiting defenders as Villa started strongly. After rolling his marker in the first minute he lashed the ball across the face of goal, forcing an urgent clearance. Soon afterwards he had a chance to score after Konsa headed a corner by Jack Grealish back across the goal but, after doing well to reach it, he sent his own header over the bar from two yards.

McGinn met a dangerous free-kick in the 17th minute with a powerful header but Dean Henderson saved without fuss.

As the first half progressed United’s well calibrated machine began to push back the hosts. The pressure from the visitors grew but penetration was lacking and, in a happy development, Villa did not look like self-destructing. And then Nyland reeled backwards over his line with the ball. But Villa got away with it.

Both sides pursued victory in the second half but Villa were more convincing, except in their finishing. Henderson made two fine saves to foil Davis and then McGinn. The closest United came was from a firm header by Oli McBurnie. This time Nyland caught the ball and held his ground. – Guardian

McIlroy well off pace as Thomas leads low-scoring Zozo 10:24
Seán O’Brien: Anger over my parents’ break-up has never left me 09:30
Touching response to Rashford’s clarion call reveals very best of England 07:00
Michael Walker: Is De Gea an answer again amid the questions at United? 06:00
Greville and Westmeath relishing life in the top tier 06:00

1 Seán O’Brien: Anger over my parents’ break-up has never left me
2 Ireland out to make a bold statement of intent against callow Italian side
3 Six Nations - Ireland v Italy: Kick-off time, TV details, team news, standings and more
4 Touching response to Rashford’s clarion call reveals very best of England
5 Ireland entitled to feel quite at home with their sparing use of residency rule
Real news has value SUBSCRIBE