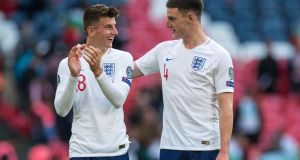 Mason Mount and Declan Rice of England at Wembley after the Euro 2020 win against Bulgaria. They will be on opposite sides on Saturday when their clubs meet at Stamford Bridge. Photograph: Sebastian Frej/MB Media/Getty Images

Mason Mount and Declan Rice, best friends from childhood, face each other in a professional game for the first time when Chelsea host West Ham on Saturday afternoon. The 20-year-old England midfielders were team-mates until Rice was released by Chelsea six years ago and they met up this week to tell their story.

When did you first meet?

Declan Rice: It would have been on a Tuesday night training. He was there from under-six at Chelsea. I came a bit later, signed when I was eight. We were seeing each other four times a week from the age of eight and that was up until we were 14. That’s where it all started, on the AstroTurf at Chelsea.

Mason Mount: When the new person comes in you want to make them feel welcome and I probably did that with you. We hit it off straight away. I was travelling up from Portsmouth. My family still are down there. We used to come up every day, my mum and dad used to take me, and then go all the way back.

DR: I was a local lad. That connection was there automatically, but even from when we were warming up, we would get there 20 minutes before, and we would just be kicking the ball together.

MM: We were speaking about tournaments we have played in together. We played in one in Holland and won it. In the semi-final we played Anderlecht and there was this player, he was unreal. He was supposed to go to Barcelona.

DR: We were the underdogs. They were raving about this one kid, Francesco Antonucci [now on loan from Monaco at Volendam in the Netherlands]. We said: “We are not having this.” We marked him out of the game. We won 2-0. We have always fought for each other.

Were you well behaved?

DR: I was the class clown.

MM: He used to do good impressions.

DR: Remember when James Corden went to meet the England team? I nailed that word for word.

MM: He just needs to watch it once and it is in his head.

DR: When we are with England, in a room together, playing PS4, I will just be making him laugh. We will be in hysterics together, saying things to each other, doing impressions.

Do people find you strange?

MM: Yeah. We are always together, so some of the boys are like …

DR: Joined at the hip, you two!

MM: Are you ever going to leave each other alone? They call us Dumb and Dumber.

Did you stay with each other when you were kids?

DR: I remember going to Portsmouth all the time. They were the best times for me. I would get there, he had a trampoline in the back garden, a football goal. On the BMXs on the streets around Portsmouth. It was the same when he came to me.

You showed him Kingston?

DR: I showed him the ropes!

MM: I remember going around his house and his mum taking us and then a story about when we were in the car and would go down the A3 …

DR: You are painting me in a bad light here.

MM: We would go down the A3 to Kingston. And we used to get packed lunches from football. There used to be boxes of couscous and chicken or a little chocolate bar. He used to wind the window down and chuck the food out. I am looking at him: “What are you doing?” His mum was shouting at him.

DR: I have matured since then.

Are your families close?

MM: Our mums are always meeting up, going out for coffees.

DR: I think they’re sitting together at the game.

What’s going to happen if you kick Mason?

DR: I think they would just laugh.

DR: Really tough. Chelsea was all I knew and having to move to West Ham, I didn’t know what was going to happen. Being away from home, not seeing my mum and dad, there were so many different things that shaped me. I remember being in my bed, calling my mum and saying: “I don’t like it”. My mum called up the digs lady, seeing if I was all right. She only told me last year.

Did it come out of the blue?

DR: That shock of my dad telling me, I just burst into tears.

MM: We had been together for a long time. My mum and his mum were on the phone crying. I never saw it coming, but I know what mentality Dec has. And look at him now.

What did you win together when you were younger?

MM: There was a tournament in Holland at Venlo.

DR: We won Venlo, we won Brussels. We won Willem.

Was Mason the golden boy?

DR: I remember Venlo, he was player of the tournament. My dad used to describe him as a little bumblebee in a jar, that annoying player who runs around and he does it for Chelsea now. He presses so well and he was just running rings around players. But that was just because I let you play. I won the ball but obviously people don’t recognise that.

Mason, what about that video of you scaring Declan on holiday last summer?

MM: We were on the boat for the day, relaxing in Dubai. It was so hot. He was so red, like a tomato. He had to go inside so I thought I would chill for a bit. He’s snoring away, so I went over, obviously this quite scared him, and as soon as it happened I realised this video was the best video I’m ever going to have.

DR: I woke up and obviously could see he had this video, kind of stretched, then next thing when my eyes fully opened, he’s on the floor in hysterics, showing his missus, going: “Oh my God, look at this video.” They’re both crying. He obviously put the video up. I leave my phone for 10 to 15 minutes, I come back to my phone, it’s never blown up so much. I was like: “Mate, you’ve ruined me holiday.”

Did that holiday make you closer?

DR: We had no intention of meeting up but once I knew he was out there that was it. It was five days straight hanging out with each other.

MM: Girlfriends out the window.

They must have been delighted.

DR They were fuming.

What do your girlfriends make of you two?

DR: My missus is quite worried. That’s genuinely being serious: “You two … you love him more than you love me.” We just get it in the neck all the time. But they need to understand the friendship.

Have you played each other before?

DR: Under-23s and we lost 3-1. He scored. Now we’ve got the game on the weekend. It’s going to be a weird experience. Mark Noble’s our captain and he absolutely loves Mase. He’s speaking about him all the time. Them two have grown really close as well. You know it’s going to be a big battle.

Are you going out after the game?

MM: Our parents will meet at the game.

DR: He’ll probably give me a lift home.

MM: Depending on the result.