Tottenham were 2-0 down to Olympiakos after 20 minutes 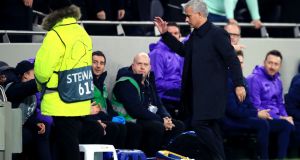 Tottenham Hotspur manager Jose Mourinho goes to high five a ballboy (partially obscured) after he quickly put the ball back in play in the build-up to Tottenham Hotspur’s second goal during the Champions League Group B match against Olympiakos at Tottenham Hotspur Stadium. Photograph: Adam Davy/PA Wire

José Mourinho has had a few Champions League saviours over the years but on this occasion, his first home game as the Tottenham manager, he could be indebted to a ballboy.

Tottenham were two goals down to an energetic Olympiakos team, with their defence looking far from secure, only for Dele Alli to change the complexion of the tie with a close-range finish in first-half stoppage time. The goal was a gift, courtesy of a terrible error from Yassine Meriah.

But the one that put Spurs in charge, lining them up for a result that ensured their qualification to the last 16, followed a piece of quick-thinking from a ballboy on the touchline. He returned a dead ball with swiftness to Serge Aurier, who got Lucas Moura away with a throw-in. Moura crossed, Harry Kane did the rest and Olympiakos were broken. In the celebrations, Mourinho sought out the kid for a high five and a hug.

With Red Star Belgrade losing at home to Bayern Munich, Mourinho needed only a draw to maintain his personal record of never having failed to reach the knockout rounds of this competition. But Spurs lengthened their stride, with Aurier crashing home a third, following an Alli cross and Son Heung-min’s flick, and Kane heading the fourth from a Christian Eriksen free-kick.

Mourinho had introduced Eriksen for Eric Dier in the 29th minute and, at that point, the manager’s big night was in danger of falling flat. Yet it all ended well and the evening was complete when Alli was withdrawn and performed a half-lap of honour, departing in front of an adoring South Stand.

Mourinho had been here before – as the assistant manager of the Inter Milan Legends team for one of the stadium’s test events in March and as an interested onlooker for Tottenham’s Premier League loss to Newcastle in August. It was altogether different here and, whether he liked it or not, it was all about him, all about whether he could settle immediately into a ground that he has described as the world’s best.

All eyes were on him and there was a scrum of photographers waiting in front of his technical area before kick-off, although there was no announcement over the PA system to welcome him. Spurs’ record here under Mauricio Pochettino showed eight wins from 15 matches in all competitions – in other words, patchy form – and Mourinho had made no secret of his determination to improve on that, to create a fortress.

It could not have started any more badly. Olympiakos opened with a slickness of thought and action while Spurs were error-strewn and ponderous. Mourinho said that he was never nervous for matches but his players looked as though they were. They were 2-0 down after 19 minutes and the second goal, in particular, would have cut Mourinho to the core.

Moments earlier, Guilherme, let loose by Danny Rose at the near post, could not connect with a Giorgos Masouras corner. Spurs did not take heed. Masouras swung in a corner from the opposite side, again the marking was poor – this time from Harry Winks – Guilherme flicked on and Rúben Semedo converted.

Not that the Olympiakos opener would have pleased Mourinho. Rose could only half-clear a high ball over the top and Youssef El Arabi glided past Winks as though he were not there before curling a fine low shot past Paulo Gazzaniga from 25 yards.

Winks had been guilty of a terrible backpass that inadvertently freed the quicksilver Daniel Podence – Davison Sánchez’s strength on the cover bailed him out – and Mourinho felt the need to make a substitution on 29 minutes, replacing Dier with Eriksen.

Mourinho was twice told off by the fourth official for leaving his technical area in the first half and his players looked equally out of place. The manager pleaded with them to calm down. For much of the first period, any composure deserted them.

Son Heung-min drew a save from José Sá with a 14th-minute flicked header while Kane banged a free-kick just over. The Spurs lifeline had not been expected but it came when Yassine Meriah miskicked horribly from a poor Aurier cross and Alli finished from close-range.

It was transformative. Spurs were faster and freer at the start of the second half and level quickly. It might have been a different story had the unmarked El Arabi been able to get a touch to another Masouras set-piece, with Spurs’ defensive looseness highlighted once again.

Mourinho’s team went straight up to the other end to equalise – thanks in part to the ballboy. Sánchez had blown a free header with the first action of the second half and, after the equaliser, there was only going to be one winner. – Guardian