Ljungberg may be given rest of season to prove his worth 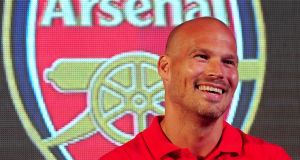 Freddie Ljungberg: “I will give everything I have to put smiles on faces again. We have a busy few weeks ahead and the team needs your support,” tweeted the Arsenal interim manager. Photograph: Jagadeesh NV/EPA

Freddie Ljungberg wants the Arsenal head coach role on a permanent basis, after being temporarily appointed to pick up the pieces of Unai Emery’s doomed tenure, and could be given until the end of this season to prove his worth.

Emery was sacked yesterday after presiding over a dire run of form, culminating in a run of seven games without a win and a 2-1 defeat against Eintracht Frankfurt in front of a half-empty Emirates Stadium.

He was immediately replaced by Ljungberg, the former Arsenal midfielder who had worked alongside him as a first-team coach since the summer, and the Swede’s first task is to lift his players before tomorrow’s match at Norwich.

Ljungberg held a meeting with the squad, during which he laid heavy emphasis on the need for togetherness and adherence to the club’s values. The 42-year-old is fully aware he is effectively auditioning for the longer-term position, and expects no favours from a recruitment panel that includes his former teammate Edu, the technical director.

But Ljungberg feels this is the kind of opportunity he has been working towards and, given his past, potentially the dream managerial job.

Arsenal are, at this stage, relaxed about the possibility of keeping Ljungberg until at least the end of the season. He is highly rated within a club he knows from all angles, having begun his coaching career with their under-15s and then -–via a short spell as assistant manager at Wolfsburg – their under-23s. Other clubs, notably West Ham, have been monitoring his situation should the need arise.

The difficulty of recruiting the right manager in mid-season is not lost on Arsenal, who have begun compiling a list of potential replacements for Emery but the club are ready to take their time.

Ljungberg will be allowed to form his own coaching staff, which is expected to be outlined today and could see the surprise inclusion of another former playing colleague, Gilberto Silva, who lives in London.

It is a sign the club are confident in his ability to mould a set-up in his own image beyond the immediate term and Ljungberg will hope he can get a faltering group onside quickly.

“I will give everything I have to put smiles on faces again,” Ljungberg tweeted. “We have a busy few weeks ahead and the team needs your support.”

In recent weeks a number of Arsenal players had made no secret, behind the scenes, of their distaste for Emery’s regime, more because of the Spaniard’s communication issues than any personal animus.

By contrast Ljungberg is particularly well-respected by the youngsters, such as Joe Willock and Bukayo Saka, who learned under him at academy level and have become important first-team squad members this season. He is a charismatic figure and a fine communicator but some more senior players are known to be more lukewarm about his appointment, believing he has gone out of his way to present himself as one of them.

Arsenal’s hierarchy held similar concerns about Mikel Arteta last year, eventually passing over their former midfielder – and current Manchester City assistant – at least in part because of his friendships in the dressing room. Arteta remains a leading contender to replace Emery, though, even if there are no guarantees he would be receptive after being denied the job late on in the process last time out.

“I don’t know if they’ll call him, hopefully he can stay with us,” Pep Guardiola said when asked about Arteta’s future. “If Arsenal want him they will call the club. It’s an honour – it’s incredible that other clubs, they want our staff, an honour, privilege and good for the club.”

The recruitment panel will consist of Edu, the head of football, Raul Sanllehi, and the managing director, Vinai Venkatesham, although whichever candidate they recommend will have to be approved by the owner, Stan Kroenke, and his son Josh.

Wolves head coach, Nuno Espírito Santo, was strongly linked with the role in the days before Emery’s sacking but it seems those suggestions are wide of the mark. Carlo Ancelotti could be another target and it is thought the job would appeal to the Napoli manager, who was interested in taking over at Tottenham before José Mourinho’s appointment last week.

Arsenal had been linked with Mourinho but he had set his sights on the Spurs position and never expressed interest in potentially succeeding Emery. Edu and his colleagues must decide whether to go with experience, with the former Juventus manager Massimiliano Allegri the kind of figure who would command instant kudos, or a less tested individual.

Eddie Howe’s progress at Bournemouth has not gone unnoticed although West Ham hold a strong interest in securing his services should Manuel Pellegrini depart. Luring Mauricio Pochettino across London so soon after his departure from Spurs would be viewed by the club as a huge coup although it is doubtful the Argentinian would countenance such a move.

Emery had hoped, until the very last, this situation could be avoided but he was formally relieved of his position in a meeting with Edu, Sanllehi and Venkatesham after they had recommended to the Kroenkes that Arsenal make the change.

“The decision has been taken due to results and performances not being at the level required,” a statement from Josh Kroenke said. “We have full confidence in Freddie to take us forward.”