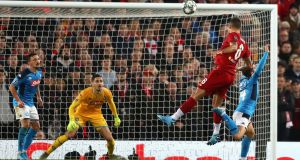 Europe holds few surprises for Jürgen Klopp after 100 Uefa games and his latest encounter with Carlo Ancelotti’s Napoli brought all-too familiar problems for Liverpool. The old fox, as the Liverpool manager once called his Italian counterpart, thwarted the European champions’ hopes of qualification for the knockout phase at Anfield.

Liverpool would have advanced with a game to spare with an 18th consecutive home victory in all competitions, penalty shootouts included, and when Dejan Lovren equalised Dries Mertens’s fine opener the stage looked set for another late comeback. It was not to be on this occasion and Klopp’s team will head for Salzburg next month needing to avoid defeat to maintain their designs on a third consecutive Champions League final appearance.

Klopp had expected peak Napoli, an enticing prospect given the quality Ancelotti’s team displayed in the 2-0 win in Italy, but they arrived at Anfield bearing scars from their on-going internal war with Aurelio De Laurentiis.

The club president has fined players for refusing his demands to attend a training camp following their draw with Salzburg and imposed a media blackout too. A run of six games without a win in all competitions was surely no coincidence given De Laurentiis’s stupidity, although the visitors made a vibrant and positive opening at Anfield.

Mario Rui’s attempt to beat Alisson from the halfway line may have been far too ambitious, with the Liverpool goalkeeper unruffled by an attempt that sailed wide, but Napoli once again caused the European champions more problems than they usually encounter in the Champions or Premier League.

Ancelotti has a knack for identifying gaps in the Liverpool defence and the players to exploit them, regardless of whatever off-the-field problems currently exist. A neat flick from Hirving Lozano released Mertens into space after a loose crossfield ball from Mohamed Salah, fit again after missing the win at Crystal Palace with an ankle problem, and Lovren had to be alert to block the Belgium striker’s low drive.

Liverpool suffered their first blow of the evening when Fabinho was forced off injured after 19 minutes. The increasingly influential Brazilian stayed down after making an innocuous looking challenge in central midfield and, despite attempts to continue, had to be replaced by Georginio Wijnaldum.

The hosts’ midfield was still adjusting when Napoli inflicted the second blow of the opening goal. It was superbly taken by Mertens, who timed his run to perfection to latch on to Giovanni Di Lorenzo’s ball over the top, took time to measure his angle with Lovren flailing in pursuit, and found the far corner of Alisson’s goal with a precision finish.

But there was also an element of controversy about the opener. Virgil van Dijk felt Mertens should have been penalised for a foul when the pair came together for a clearance by Napoli goalkeeper Alex Meret. The forward was certainly looking at his man and not the ball when he caught the defender’s hip but, following a lengthy VAR review, the goal stood.

There then followed a second VAR check for offside. Three minutes were wasted in total. The goal stood and Liverpool’s blood began to boil at referee Carlos Del Cerro Grande.

Klopp stared in disbelief at the Spanish official over his refusal to award the free-kick that Van Dijk wanted. He grew increasingly agitated over a series of calls in Napoli’s favour and lost it completely when Del Cerro Grande dismissed Sadio Mané’s appeal for a penalty as Liverpool belatedly rallied late in the first half.

Di Lorenzo touched Mané’s shoulder as the striker weaved his way inside the area before going to ground; too easily for the referee’s liking who waved play on. A foul on Mané by Allan prompted another outburst from the Liverpool manager and he received the first yellow card of the contest as a consequence.

Liverpool created little before the interval and were uncharacteristically careless in possession. Kalidou Koulibaly and Kostas Manolas, the visiting central defenders, were often perfectly placed to deal with all manner of deliveries into their area. When James Milner did break the blue line, weaving his way past three players with impressive flair, Meret held his position well to save at the near post.

The home side’s accuracy on the ball, intensity and movement improved considerably in the second half, however, and despite a few uncomfortable moments for Joe Gomez the game was otherwise confined to deep inside the Napoli half.

A mistake by Meret presented Liverpool with their clearest opportunity when, attempting to collect Jordan Henderson’s out-swinging cross, he dropped the ball at the feet of Roberto Firmino. The Brazil international hooked goalwards but Koulibaly, not for the first time, was alert to the danger and cleared off the line with his knee.

Salah shot straight at the Napoli goalkeeper when found in space by Andy Robertson. His reaction told that he should have done better. Firmino sent a stooping header wide from substitute Alex Oxlade-Chamberlain’s cross.

The pressure was building and the visitors finally broke when Lovren met Milner’s corner with a towering header that flew beyond the stranded Meret. Napoli appealed for a VAR intervention for an alleged push by Lovren on Mertens. It was as tame as Di Lorenzo’s on Mané earlier and rightly ignored. – Guardian

Tiger Roll still on track for Aintree after placing fifth in Boyne Hurdle 16:17
Andy Farrell recalls 13 players to Ireland squad ahead of England clash 15:11
Leaving Cert prep forces Beibhinn Parsons out of rest of Six Nations 15:01
Kieren Westwood: ‘I feel obliged to clear my name and defend myself’ 14:01
All in the Game: No Moore medals for Steven Gerrard 12:34