Who are Slovakia? A look at Ireland’s Euro 2020 playoff opponents 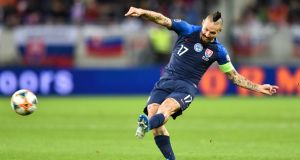 Marek Hamsik is the captain of the Slovakia team. Photograph: Getty Images

Barring an unexpected change in the playoff rules made by Uefa, Ireland are set to face Slovakia in their Euro 2020 playoff semi-final next March. The Slovaks are somewhat unfamiliar opponents for Ireland so here we have a look at the first opponents in Ireland’s last gasp attempt to reach Euro 2020.

How are Slovakia in the playoffs?

After Wales’ victory over Hungary on Tuesday night, Gareth Bale and co booked their place at Euro 2020 next summer, therefore condemning Slovakia to the playoffs next March. The Slovaks had a fairly up-and-down campaign with two standout wins at home and away to Hungary but losses home and away to group winners Croatia as well as a 1-0 defeat at the hands of Wales in Cardiff meant they finished Group E in third place.

When was the last time they were at the Euros?

Slovakia have only been an independent team since the split from Czechoslovakia in 1993 and since then they have only qualified for one European Championships which were in France in 2016. At that tournament they reached the last 16 thanks to a win over Russia and a final match 0-0 draw against England before being knocked out by Germany in the second round. They also reached the last 16 at the 2010 World Cup after a heroic final match 3-2 win over Italy.

Since 1993 Ireland have played Slovakia five times with the sides evenly matched in four while Ireland won 1-0 at Croke Park in their Euro 2008 qualifier under Steve Staunton. A 2-2 draw followed in Bratislava while there were also draws under Giovanni Trapattoni during the qualification campaign for Euro 2012. Most recently Shane Long and James McClean scored in a 2-2 friendly draw in Dublin three years ago.

After earning 104 caps for Slovakia, former Liverpool defender Martin Škrtel retired earlier this year but former Napoli forward Marek Hamšík is still playing and captaining the side. Hamšík is now lining out for Dalian Yifang in China but, even at 32 years old and with 120 caps to his name, he remains an integral part of Pavel Hapal’s team.

Any connections between Ireland and Slovakia?

Not a lot, it must be said. However, Slovakia was the scene of the famous free train laid on by the FAI after a mix-up in venues for the Euro 2012 qualifier in 2010. After the organisation had prematurely announced that the match would be in Bratislava, former FAI chief executive John Delaney (remember him?) laid on €5,000 worth of free beer for Ireland fans on board the train to the actual destination of Zilina.

Another connection is through current Ireland under-21 international Connor Ronan who plays for Dunajská Streda, currently in second place and six points behind Slovan Bratislava in the Slovak Super Liga.

Indeed it was Slovan Bratislava who knocked Dundalk out of the Europa League qualifiers back in August.

Where do Slovakia play their home matches?

The national team alternates between Bratislava and the nearby city of Trnava with most of their competitive matches, including all of their Euro 2020 qualifiers, taking place in the Štadión Antona Malatinského in Trnava. The Slovak FA has until December 20th to confirm the venue for their meeting with Ireland but it would be safe to assume it will be in Trnava.

So how do I get to Trnava?

Ryanair are the only airline who fly direct from Dublin to Bratislava with Trnava then just 30 minutes away on a train. Alternatively, and potentially cheaper, you could fly to Vienna which is just over an hour on the train from Bratislava where you can switch to get to Trnava.

1 Gordon D’Arcy: the next fear for Irish rugby is England in Twickenham
2 Solskjaer says Mason Greenwood ‘needs to learn how to head a ball’
3 Seán Moran: Fallout from Tyrone final celebrations will concern GAA
4 David Moyes discovered positive test an hour after arriving at London Stadium
5 Pro14 teams need private planes to keep show on the road
Real news has value SUBSCRIBE
Crossword Get access to over 6,000 interactive crosswords