Unai Emery sacked by Arsenal with Freddie Ljungberg to step in

FROM SEPT 2019: Unai Emery says former Arsenal midfielder Freddie Ljungberg's "knowledge of the club and young players" is behind his active role during their Carabao Cup win. Video: Reuters 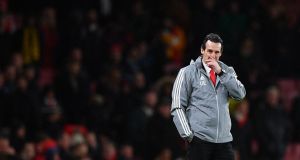 Arsenal have sacked manager Unai Emery following the disastrous sequence of results that culminated in Thursday’s 2-1 home defeat to Eintracht Frankfurt in the Europa League in front of a largely empty Emirates Stadium.

The club’s board had publicly backed their manager during the recent international break saying he was “the right man for the job” but that “things need to improve”. However Saturday’s toxic 2-2 draw with struggling Southampton and Thursday’s Europa League defeat seem to have forced their hand and Freddie Ljungberg will take temporary charge of the team.

Arsenal board member Josh Kroenke said: “Our most sincere thanks go to Unai and his colleagues who were unrelenting in their efforts to get the club back to competing at the level we all expect and demand. We wish Unai and his team nothing but future success.

“The decision has been taken due to results and performances not being at the level required. We have asked Freddie Ljungberg to take responsibility for the first team as interim head coach. We have full confidence in Freddie to take us forward.

“The search for a new head coach is under way and we will make a further announcement when that process is complete.”

Emery’s dismissal would come as no surprise to the Arsenal squad, a number of whom have made little effort to hide their dissatisfaction with the regime in recent weeks. Communication issues, rather than any personal animus with the head coach, are believed to be the significant factor in that and Ljungberg’s clarity would be welcomed by a team that has struggled to understand much of what Emery is demanding.

Emery lasted only 18 months in the role, having been the club’s choice to succeed Arsène Wenger in May 2018 after the Frenchman’s 22-year tenure.

Emery’s first season saw Arsenal finish sixth after seemingly having a top-four place within their grasp at Easter, and also losing the Europa League final 4-1 to Chelsea in Baku.

That poor form from April and May has carried on into the new campaign, with just four wins from 13 Premier League games and a recent run of seven winless matches that has seen Emery’s side slip to eighth, and eight points adrift of the top four.

There has been widespread discontent among supporters, and the 48-year-old Spaniard’s handling of the recent Granit Xhaka situation and that of the club captaincy have drawn plenty of criticism, as had the long-term problem surrounding the management of Mesut Özil.

Ljungberg, the former midfielder who was part of Arsenal’s Premier League title-winning teams of 2002 and 2004, only became part of the first-team setup in the summer, having returned to the club as under-23s coach in the summer of 2018.

The 42-year-old Swede has no previous managerial experience, having spent six months as assistant coach at German club Wolfsburg in 2017-18, but will take charge of the team for Sunday’s game at Norwich, with a home game against Brighton to come on Thursday. – Guardian