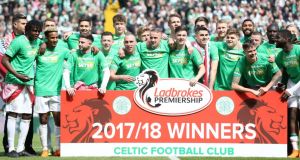 Scotland’s football authorities did everything in their power to prevent the situation whereby Celtic could secure a seventh title in succession by defeating Rangers. Long before full-time here, it was Rangers who dearly wished such a scenario had never been allowed to come to pass.

Celtic mauled their oldest foes here, in a manner which perfectly – and ominously for Rangers – illustrated the gap between the Glasgow clubs and confirmed league flag retention.

A penny for the thoughts of Steven Gerrard, the man tipped to take over at Ibrox from the end of this season. When watching this Rangers horror show unfold, the former Liverpool captain may well have contemplated a poisoned chalice. Conversely, Gerrard may feel matters at Ibrox can hardly get any worse. Rangers, a rudderless club, are embroiled in a serious battle just to finish the season as Scotland’s second-placed club.

This was, however, Celtic’s day. From the outset, they swarmed around their visitors and attacked with the verve which has typified the finest parts of Brendan Rodgers’s tenure here. Rodgers has now won 11 from a possible 11 Old Firm encounters.

Odsonne Edouard, handed a rare start in attack, set the tone with a fine opening goal. The French striker met a Kieran Tierney cross before sweeping home. Other than a Jason Holt effort that was well saved by Craig Gordon, Rangers offered no sign of a reply. Edouard doubled the hosts’ advantage after the Rangers defence backed off and backed off; the Paris Saint-Germain loanee duly cut in from the right and smashed the ball past Jack Alnwick.

Number three arrived before the interval. James Forrest, one of many Celtic players to enjoy an outstanding afternoon, was allowed time and space of his own. Like Edouard, the winger was allowed infield before angling a perfect shot into Alnwick’s net.

Tom Rogic added to Celtic’s lead after more horrendous Rangers defending. Alnwick failed to recover after saving a Callum McGregor effort, with Rogic on hand to flick into an unguarded net. McGregor earned the goal his showing deserved, from close range after Edouard’s build-up play.

As Celtic celebrated – and some – Rangers were left to ponder the worrying matter of 37 minutes still to play. A combination of wasteful finishing and some excellent Alnwick saves kept the margin of victory at five. That barely emphasised Celtic’s superiority even if another figure, that of seven in a row, surely does.