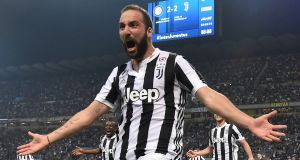 Juventus produced a stunning late show to beat 10-man Inter Milan 3-2 and get their Serie A title push back on track.

Juve saw their gap at the top of the league cut to one point when they lost to Napoli last weekend and they were heading for another shock defeat after Mauro Icardi’s effort and a Andrea Barzagli own goal put Inter within touching distance of a fine win.

But Massimiliano Allegri’s men, who led early on through Douglas Costa, refused to give up and drew level in the 87th minute through Juan Cuadrado and then two minutes later won it thanks to Gonzalo Higuain’s header.

The three points, which have to be considered a bonus, mean they are now four ahead of Napoli, who play Fiorentina on Sunday.

Inter battled bravely, having been forced to play most of the game with 10 men after Matias Vecino was sent off after a challenge on Mario Mandzukic.

Roma warmed up for their Champions League second leg with Liverpool by hammering Chievo 4-1.

The Giallorossi will hope to repeat their heroics against Barcelona in the last round by overturning a 5-2 semi-final first-leg deficit against Jurgen Klopp’s men on Wednesday and found some form on home soil.

They were woeful at Anfield, but fared much better in their domestic league, winning thanks to goals from Patrik Schick, Eden Dzeko (2) and Stephan El Shaarawy.

Schick opened the scoring in the ninth minute when he swept home Dzeko’s cross from the left and then the former Manchester City striker got on the scoresheet five minutes before the break by poking home Aleksandar Kolarov’s centre.

Roma were reduced to 10 men when Juan Jesus was dismissed for a professional foul, but Roberto Inglese missed the resulting penalty.

El Shaarawy made the game safe with a finish into the bottom corner before Dzeko’s second concluded the rout, with Inglese atoning for his earlier miss with a consolation in injury time.