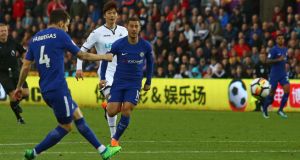 Fabregas struck in the fourth minute on a wet evening in south Wales – his 50th Premier League goal and 15th for Chelsea after scoring 35 for former club Arsenal.

Swansea had their opportunities, particularly in the second half, to claim some rewards, but the 1-0 defeat means it is now six games without a win for Carlos Carvalhal’s side.

There is also little breathing space for Swansea now in the fight for top-flight safety as Southampton’s victory against Bournemouth reduces their advantage to the relegation zone to one point.

Blues boss Antonio Conte patrolled the technical area like a caged tiger throughout and it was easy to see why with so much at stake.

Liverpool’s goalless draw at home to Stoke earlier in the day had slightly opened the door to Chelsea as far as qualifying for next season’s Champions League was concerned.

A nine-point gap at kick-off was reduced to six, with Chelsea – who are two points adrift of fourth-placed Tottenham – having a game in hand over their Merseyside rivals.

Intriguingly, Chelsea and Liverpool meet at Stamford Bridge next weekend, when the pressure could really be applied on Jürgen Klopp’s side.

Swansea’s defensive resources had been depleted by the loss of Federico Fernandez and Kyle Bartley to injury.

So Kyle Naughton, the regular right back, became one of three central defenders and Connor Roberts came in for his first Premier League start.

But that unfamiliarity in the Swansea defence was exposed immediately as Eden Hazard found Fabregas unmarked in the penalty area and the Spaniard curled a delicious shot past Lukasz Fabianski.

With Hazard running the show, Chelsea were in complete command and Victor Moses saw his goal-bound effort blocked by Alfie Mawson before Olivier Giroud failed to divert a header goalwards.

Swansea’s anxiety was reflected by Mawson skimming the top of his own crossbar after the ball had ballooned into the air and Giroud had won the header.

Swansea had to find a cutting edge after the break and there was optimism when Olsson crossed for Andre Ayew to head over under pressure from Antonio Rudiger.

But it was difficult to lay a glove on a Chelsea defence in which England defender Gary Cahill was given another pre-World Cup opportunity to impress and that was superbly protected by N’Golo Kante.

There was also the danger of a productive Chelsea counter and Fabianski went low to his left to deny wing back Emerson after one such raid.

Swansea went close when Jordan Ayew headed over as Chelsea struggled to clear a corner and his brother Andre curled just wide as the hosts began to press in the final quarter.

Naughton’s half-volley then forced Courtois into action and Cahill had to come to the rescue with a perfectly timed penalty-area challenge on Nathan Dyer.