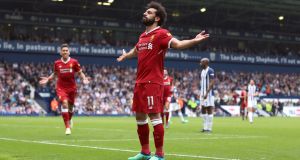 Former Liverpool striker Ian Rush says that Mo Salah’s Player of the Year award is well deserved and that he would be happy to see the Egyptian striker better his record of 47 goals in a season for the Merseyside club by scoring the winner in the Champions League final.

However, he reckons that getting the defensive side of things right against Roma in Anfield on Tuesday is the key for Jurgen Klopp’s side if it is going to make it to next month’s final in Kiev.

“You can’t really jump the gun,” says Rush who was in Dublin on Monday morning to promote the summer friendly between Liverpool and Napoli at the Aviva stadium on August 4th.

“There are these games against Roma and I think the one against them tomorrow will most likely be the most important one because if you look at the last two ties, they’ve gone through on away goals so I think we’ve got to stop Roma from scoring. I’m pretty sure that we can score goals with the front three that we’ve got but I think it’s important that we keep Roma from scoring at Anfield then hopefully we can go to Rome with something to play for.”

The Italians have indeed progressed after losing away but scoring against Shaktar Donetsk then Barcelona with their solitary away goal ultimately the difference in two legged ties that were drawn 2-2 and 4-4 respectively, but Rush admits that this Liverpool team is unlikely to alter its approach in order to place any greater emphasis on not conceding.

“That’s the way they play,” he says. “The way the manager likes to play is to entertain. So Liverpool will play as normal: exciting football, it’s the way they’ve played all season and I don’t expect anything different when they play Roma tomorrow.

“But I think over the last couple of months we’ve got better (defensively). I think the arrival of van Dijk’s been a big bonus for us and I think with Karius being the number one, there’s a bit of confidence about us now so, we have kept a few clean sheets over the last month or so and van Dijk has had a big say in that because he has come in and been fantastic.

“I think he (Klopp) has been incredible; he’s given them the confidence, he’s got them playing as a side, going out there to enjoy themselves. They are playing as a team and that’s what it’s all about and you talk about the front three but they work so hard for each other. The teamwork that they’ve got is down to Klopp doing all that.

“If they get another couple of players in next season then I think there’s a genuine possibility that they could challenge Manchester City; they have the best squad, that’s why they won the league but 11 v 11, Liverpool have proven that they can beat them. The problem is that if you change four or five at City they are still as strong; if Liverpool could do that next season then I would say they would have a chance of winning the league.”

That is some way off but Liverpool could be champions of Europe within a matter of weeks although it is unlikely to happen unless Salah keeps scoring, possibly the seven he requires to beat Rush’s 34 year-old record of 47 in all competitions in the one season.

“Hopefully (he will get it),” says Rush. “I think he’s been a joy to watch. When I scored 47 goals I went out knowing that I was going to score and I can see that in him now; he must be going out on the pitch and knowing he is going to score.

“There are only two people I can think of who have had first seasons at the club like that, Torres and Suarez. Their first seasons, they were absolutely fantastic but I can honestly say to that I think Salah’s having a better first season than them two which takes some doing. He scores so many goals but he makes so may too. It’s a big thing but I do think that’s probably outdone Luis Suarez.

“He’s different but inside the box he does remind me of Messi. He comes short but the he goes beyond defenders. He’s quick, not just over 5-10 yards but over 40-50 yards but he’s himself, something different and he’s take the English Premier League by surprise.”

If Liverpool do pull it off and win another Champions League the game in Dublin, he says, could be the meeting of the European and the Italian champions although he is, he admits, still rooting for Juventus in the Serie A title race.

“After the 1-0 win last night against Juventus, it’s wide open now. Obviously I played for Juventus and deep down I’d like to see them win but I think it’s Napoli who have the easier run in so I think it’s going to be very interesting.”

Whatever happens, he maintains, the game in August will be important to a club that has a tradition of visiting Ireland and continues to enjoy strong support here.

“We came over a few times,” he recalls, “but it wasn’t to a stadium like this (the Aviva). We used to always come over to play a game in preseason but it was to Home Farm and places like that. There was great support then and it’s the same now, it’s just got bigger and bigger.

“At Liverpool we see ourselves as a family club bit not everyone gets the chance to come over to Liverpool so what we’ve got to do is get first team players to come over here and entertain the supporters in Ireland.”