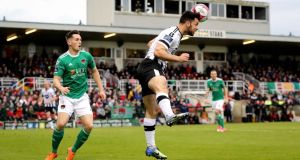 Not for the first time a top of the table clash between Cork City and Dundalk ended with the two managers trading accusations over their respective sides’ styles. Given the result, though, John Caulfield, looked cheerily unconcerned on Friday night by suggestions that his players’ priority had been to stop their opponents playing while routinely resorting to long balls.

“Maybe if Stephen looks at the last 20 minutes of the match…” he suggested with a smile. “They certainly played 20 or 30 balls direct from the halfway line. So it depends on what way you look at it. And if people want to criticise me, that’s fine. But I’m here to do a job.”

This time last year, he was leading a free-scoring Cork City side built around Sean Maguire and his goals to the title. Friday night’s win, by contrast, put them clear of their rivals at the top on the basis, first and foremost, of their defending.

Caulfield’s team have taken 12 points from 12 since the eventful defeat in Waterford while scoring just five goals. That’s not a number that leaves much margin for error at the back but City have not conceded once.

What is more remarkable is that the back four on Friday had an average age of just 21 and the general thinking beforehand - especially after the only surviving regular of last season’s title success, Shane Griffin had had to be replaced with Danny Kane in the run up to kick-off - was that Dundalk would be able to exploit that inexperience.

As it turned out, the visitors had the greater number of chances but barely managed to make Mark McNulty make a decent save. Kane came through his league debut with considerable credit after Sean Gannon let him know in no uncertain terms during the opening minutes just how tough this rivalry can get, while the central partnership of Conor McCarthy and Sean McLoughlin further enhanced their growing reputation.

Caulfield said last summer as McCarthy signed his first professional contract with the club that he has high hopes for the then teenager and it has become abundantly clear this season why.

“You can see his talent,” said the City boss. “It’s all about concentration and focus and with the young lads it’s all about holding their concentration because they have energy and they have legs and tremendous ability but sometimes you can switch off and get bullied.”

The player, who signed from Blarney United and featured in the under-19 side that played in the Europa Youth League, featured in the side that lost 1-0 at Oriel Park and admits to having felt slightly intimidated there but he thrived on the atmosphere at Turner’s Cross. And while Gearoid Morrissey’s goal will be remembered for winning the game, he and his fellow defenders came away, he feels, with something to celebrate too.

“They are our goals,” he says of the latest clean sheet. “Sads (Kieran Sadlier) might score a worldy and Graham (Cummins) might score a header or whatever, but they’re our goals. Even in the dressing room, with Nults (hugely experienced goalkeeper Mark McNulty), we wouldn’t consider ourselves a back four, more a back five and we’d all be buzzing for each other.”

McCarthy has a strong relationship with Sean McLoughlin, a friend from their days in the club’s underage teams together and both have come through under the watchful eye of Alan Bennett who, the 20 year-old described as “a huge influence”.

Getting out there and doing it in front of a big crowd anxious to see a local lad succeed but more desperate, in the end, to see City actually win is something that cannot really be taught. McCarthy, though, shows strong signs that he is picking up all that he needs to know.

“It is a big jump,” he acknowledges, however, “and I underestimated it big time. In the 19s the intensity isn’t really there but fighting for results week-in, week-out, having titles on the line, having crowds on your back: it has definitely helped me make the step up.”

He’ll have to do it again on Monday in Tallaght as the champions look to maintain their run at Rovers but having emerged with a clean sheet from a frantic game against City’s great foes of recent seasons, McCarthy might be forgiven for believing there will be nothing there he should fear.