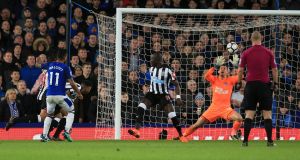 There was one banner calling on Sam Allardyce to go at Goodison Park but the Everton manager was spared further hostility as Theo Walcott’s clinical finish delivered a valuable home win. Those wishing to express their distrust in the former England manager may have to make do with a club survey for now.

Walcott’s third goal since joining Everton in the January window polished an otherwise dull affair at Goodison where Newcastle’s winning streak came to a subdued end. Rafael Benítez and his players have hauled themselves clear of danger impressively in recent weeks but, despite finishing the stronger team, and having a late handball claim against Phil Jagielka waved away by the referee, Bobby Madley, paid the price for clear deficiencies up front.

Allardyce had called for clarity over his long-term position before a game attended by Everton’s major shareholder, Farhad Moshiri. A glance to his left before the kick-off will have given the home manager a reminder of the clarification many supporters are hoping for. “Our survey says … Get out of our club” read a banner draped over the upper Gwladys Street stand.

Anti-Allardyce sentiment had been reserved for Everton’s away matches, unsurprisingly given the contrast in results on the road and at Goodison, but the recent PR fiasco of asking fans to rate an unpopular manager on a scale of zero to 10 presented an opportunity not missed at home. A solid but unspectacular first-half performance did nothing to appease the restless natives.

Newcastle arrived free of relegation trouble following four straight wins, albeit needing to avoid defeat to be mathematically certain of staying up, and with Jonjo Shelvey hoping to press his claims for a World Cup call from the England manager, Gareth Southgate. The former Liverpool midfielder was unable to impose himself on a first-half in which Idrissa Gueye and Morgan Schneiderlin controlled the contest, even though Everton failed to force Martin Dubravka into a save of note.

Cenk Tosun sliced wide after a run from Walcott resulted in an early chance for the Turkey international. Jagielka, the Everton captain, had a better opportunity when Michael Keane headed Wayne Rooney’s deep cross back across goal only for his central defensive colleague to volley over from close range.

Walcott also shot over on the stroke of half-time following a determined Rooney run from midfield. That was the sum total of Everton’s threat.

Benítez’s team created less owing to a lack of composure with their final ball. They should have punished a miscued clearance from Jordan Pickford that gave Ayoze Pérez the freedom to play the fit-again Islam Slimani clean through on goal. Pérez badly overhit his pass and the Everton goalkeeper was spared. Pickford was jeered throughout by the Newcastle support, who have not forgotten nor forgiven the former Sunderland goalkeeper for tweeting “Get the rave on” when his rivals were relegated in 2016.

Everton emerged early for the second half and Allardyce was visibly furious with his players for standing around while awaiting their opponents. He had a point. Within minutes Jagielka was caught in possession deep inside the Everton half, allowing Kenedy to send Pérez sprinting through on goal. The Spaniard sized up his shot just as Keane came across to cover for his captain and put Pérez under sufficient pressure for him to slice wide. The miss was swiftly punished by the hosts.

Walcott made an encouraging start to his Everton career following his £20m January move from Arsenal but had gone nine games without a goal, and several anonymous performances, when he enlivened the match with a smartly-taken breakthrough. Yannick Bolasie was the provider, driving down the right and using Seamus Coleman’s over-lapping run as a decoy before sending a dangerous cross to the back post. The ball rebounded into Walcott’s path via the unwitting DeAndre Yedlin and the winger took an assured touch before driving high into Dubravka’s goal.

Benítez, in his 100 game as the Newcastle manager, reacted by replacing Slimani with Dwight Gayle and he should have equalised with his first touch. Shelvey’s corner was flicked on by Jamaal Lascelles to the striker, who had space inside the six-yard area, but his first-time shot sailed over Pickford’s crossbar. Everton lost Schneiderlin to injury in the immediate aftermath of Walcott’s goal and his absence was felt, reflecting his improved form following a torrid campaign, as Newcastle gained the upper hand in the closing stages. Pickford saved Pérez’s header, while Matt Ritchie was close with a free-kick from 20 yards. – Guardian service