Klopp’s thrilling Liverpool side unlikely to fear a Roma fightback 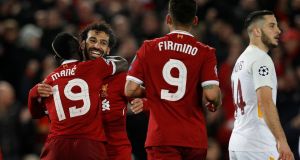 The awe and wonder from a remarkable Anfield night has not diminished the day after. Fifteen minutes to play in a Champions League semi-final and Jürgen Klopp thinks of Stoke. Almost 60 per cent remains of a tie to decide the cream of Europe’s elite and it is Bruno Martins Indi, Erik Pieters and Mame Biram Diouf that enter the Liverpool manager’s head as he withdraws Mohamed Salah to safeguard against injury.

What’s more, he admits it too. “I’m not thinking of one game,” Klopp explained. The thought was justified, and another measure of Liverpool’s astonishing command over Roma. Respite from Salah is only temporary.

Uefa ranked Liverpool the number one team in Europe in February 2009 based on a five-year period of success and consistency under Rafael Benítez. A month later they revelled in that status with a 4-0 destruction of Real Madrid that took Benítez’s team into the Champions League quarter-finals, following a semi-final appearance in 2008, a runners-up spot in 2007 and the ultimate triumph in 2005.

Klopp’s Liverpool cannot compare with that body of work in only his second full season as manager. His team have, however, reached a level of exhilarating attacking brilliance in this Champions League campaign that their predecessors would envy. And just like the quality of Salah’s goals, they are improving.

The 5-2 first leg romp over Roma made it 38 goals in the Champions League this season for Liverpool. It is 44 when the qualifier against Hoffenheim is included. With 10 goals apiece, Salah and the crucial Roberto Firmino now share the record for most goals in a single European campaign by a Liverpool player. Along with Sadio Mané, who should have had a hat-trick on Tuesday, they form the most prolific forward line in the competition – 28 goals and counting. And Liverpool have scored in each of their six European away fixtures this term.

Roma’s obligation to attack in Stadio Olimpico next Wednesday will whet Liverpool’s appetite for more. “I learned tonight that we can win the second leg, too,” admitted Klopp, though he was in no mood to celebrate after losing Alex Oxlade-Chamberlain to a serious knee injury.

Post-match interviews are framed by emotion but the contrasting approaches of the managers in the aftermath of the first leg also bodes well for Liverpool’s pursuit of a sixth European Cup.

Eusebio Di Francesco, the Roma coach, abdicated responsibility for the high defensive line and three-man rearguard that invited Salah to destroy his former club with one of the finest individual performances in Europe that Anfield has witnessed.

It was his players’ fault, Di Francesco claimed, for losing too many individual duels and allowing the Liverpool midfield to launch the “lethal” breaks that Roma had focused on stopping in training. “My Roma players don’t need to tell me about Salah,” ran the headline on the Guardian’s interview with Di Francesco this week. Someone should have done.

“We don’t need miracles” was the gist of the Roma coach’s message as he inevitably invoked memories of their quarter-final comeback against Barcelona. As others quickly pointed out, Liverpool achieved a level of dominance over the Italian side on Tuesday that the Spanish league leaders never did, not even during their 4-1 first leg victory at Camp Nou.

Roma were given hope at Anfield by the two late away goals that followed Salah’s substitution. It is unlikely to be hope but the magnificent Egyptian that kills them in the return.

Klopp took a different line to Di Francesco by accepting responsibility for a scoreline that everyone at Liverpool would have embraced before kick off. “If someone wants to say it is my mistake they scored two goals because I changed the striker I have no problem with that,” he said, having pointed out that it was one defensive lapse and one penalty decision that enabled Roma to close the gulf.

The real threat of Salah’s exit was to limit Liverpool to five. Just the five goals, in a Champions League semi-final, and with Oxlade-Chamberlain adding to an ominous injury list Klopp had every reason to protect the forward line that is slicing through Europe.

Oxlade-Chamberlain has been an increasing influence on the Champions League campaign but will not play again this season after suffering sustained knee ligament damage when challenging Aleksandar Kolarov at Anfield. Adam Lallana and Emre Can are also long-term absentees, although Can does have a chance of returning from a back injury before May 26th. His rehabilitation may just have stepped up a notch at Melwood today.

Georginio Wijnaldum was formidable when he replaced the England international against Roma, however, while Jordan Henderson and James Milner – whose nine assists are the record for a Champions League season – were again outstanding in Europe as they turned the semi-final in Liverpool’s favour.

The last three senior midfielders standing at Anfield will get no relief in the days ahead. On to Stoke.