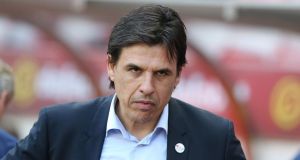 Sunderland have sacked manager Chris Coleman after failing to keep the club in the Sky Bet Championship.

The 47-year-old left his role as Wales national team boss to succeed Simon Grayson at the Stadium of Light last November.

But Coleman could not prevent the Black Cats from suffering relegation during his five months in charge.

A statement on the club’s official website read: “Sunderland AFC announces that manager Chris Coleman and his assistant Kit Symons have been released from their contracts.

“The club would like to place on record its sincere thanks to Chris and Kit for their tireless efforts in what has been a hugely disappointing season for everyone involved with the club.

“The club is unable to make further comment at this time.”

Meanwhile owner Ellis Short has agreed to sell the club to a group led by Stewart Donald, the chairman of National League side Eastleigh, the Wearside club have announced.

1 Nadia Power determined to push on to the next level
2 The Best Of Times: Harrington stares down Garcia in epic Claret Jug battle at Carnoustie
3 Rugby impasse continues as no deal reached in fourth round of IRFU salary talks
4 Seán Moran: GAA seems determined to create civil war
5 Jürgen Klopp: Liverpool will channel spirit of the All Blacks
Real news has value SUBSCRIBE