The Perfect 10: why Johnny Sexton should win the World Player of the Year 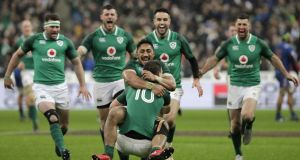 Johnny Sexton is engulfed by his teammates after scoring the winning drop goal in Paris. Photograph: Getty Images

The clock has passed the 77 minute mark. Ireland trail France by 13-12 and their goose looks cooked. Anthony Belleau is lining up a kickable penalty about 35 metres out and 15 in from the left touchline. Nobody is thinking about a Grand Slam, but behind the Irish posts Johnny Sexton is plotting a way out of this hole.

Ireland have been the better team on a miserably wet, dark grey day in Paris and have led for over 70 minutes. But they’ve also been hit by a sucker punch Teddy Thomas counter-attacking try just five minutes earlier which Belleau converted to overtake Sexton’s four penalties.

In the Irish in-goal area, Sexton’s competitive fire is still burning. He tells Fergus McFadden that if Belleau misses, he’ll be hanging his 22 metre restart to the left touchline for the replacement winger.

On 77 minutes, 20 seconds Belleau’s kick drifts wide of the left upright and Sexton catches the ball on the dead ball line before rushing to the 22. Seven seconds later, he lofts his drop out toward the left touchline and McFadden, but where Iain Henderson, unscripted, brilliantly catches the ball.

Four phases later, Sexton works his wraparound, but is forced to check back inside and carry hard into contact. It takes Ireland 24 phases to almost get to half-way and it’s hard yakka.

Now, with the clock in the red on 80 minutes 30 seconds, Sexton gambles and cross-kicks to Keith Earls from the Irish 10 metre line. Throughout the game, Earls had been telling Sexton that the cross kick was on, but this was Sexton’s first chance to try it.

Earls gathers five metres inside the French half, relatively unchallenged by Virimi Vakatawa, and also steps Henry Chavancy to buy a precious three or four seconds for Robbie Henshaw and Rob Kearney to secure the clean-out.

The drop goal is on, except that two phases later Sexton is down on the ground, stretching his cramping right leg. Ireland go through another 16 phases but for a net gain of about five metres before, on 82 minutes and 37 seconds, Murray passes to Sexton 45 metres out.

Sexton launches a win-or-bust drop goal, and raises his hands into the air as the ball crosses the bar and bisects the posts. He runs back into his own half and is chased and engulfed first by Bundee Aki, then Murray, McFadden, Henshaw and Kearney, before Dan Leavy throws himself on top of the pile.

All this happened on February 3rd and the first weekend of the Six Nations, but if there was a Moment of the Year, this was surely it, better even than any try if just for the sheer drama of it. No one phase of play could better illustrate Sexton’s will-to-win, skill set, and at 33 years of age, his decision making, leadership and nerve.

Ireland would go on to win the Grand Slam for the first time in nine years, only the second time in 70 years and third time overall, beating Italy, Wales and Scotland at home in successive games before going to Twickenham on a bitterly cold St Patrick’s Day to beat England. By then they had become a machine, with Sexton “the conductor of the orchestra” as Joe Schmidt likes to call him.

Schmidt risked naming Sexton on the bench for the first test against Australia in Melbourne in order to give Joey Carbery a start in a slightly experimental line-up. It was the only time Sexton lost in an Ireland shirt in 2018. Akin to the Lions, Sexton returned for the second and third tests, as Ireland won both to seal a first series win Down Under since 1979.

Then, in the past month, Sexton guided Ireland to home wins over Argentina and, for the first time ever, the All Blacks in Dublin. In his last 13 test starts for Ireland and the Lions, Sexton has been on the winning side 12 times and drawn the other.

Sexton, and most probably Schmidt, will be among a delegation from Irish rugby to be taken by private charter to Monte Carlo for tomorrow evening’s World Rugby, red carpet, gala awards dinner.

Schmidt must be in the running for the Coach of the Year, and Ireland for Team of the Year, as well as Jordan Larmour for Breakthrough Player of the Year and CJ Stander for Try of the Year. But of the 15 awards, the most prestigious is Player of the Year, where Sexton has been nominated along with the All Blacks pair of Beauden Barrett and Reiko Ioane, and the Springboks due of Faf de Klerk and Malcolm Marx.

That shortlist was drawn up after members of the International Rugby Players submitted their nominations for their Player of the Year, which numbered several hundred, on foot of which supporters were asked to vote on social media.

Sexton was also an integral part of Leinster’s Heineken Cup and Guinness Pro14 double (his only defeat in 20 starts for province or country was with Leinster last month in Toulouse) albeit the award is based solely on achievements in international rugby in the calendar year, dating back to January 1st, and so does not take into account provincial or club achievements.

“I have a fair idea which way I am voting,” said O’Driscoll this week. “I would think on the balance of what has gone on this year with someone that has pulled it out of the fire for Ireland, scoring a 45 metre drop goal, I know it is not based as much on provincial play but he has managed to win a European Cup and the Pro14.

“They also won the (Australia) series and now they will be unbeaten in November, I think it is very hard to go away from a guy that has been front and centre in all those performances and victories. So, yes I will be voting for the Ireland number ‘10’.”

But the decision to award Richie McCaw the Player of the Year in 2009 ahead of O’Driscoll acts as a cautionary tale. O’Driscoll captained Ireland to a Grand Slam and an unbeaten 2009, with seven wins and a draw in his eight tests, not to mention playing a major role for the Lions in South Africa as well as Leinster’s Heineken Cup triumph.

As one can also tell both from the shortlist itself and recent history, this award leans heavily towards the southern hemisphere. As well as four of the five nominees, New Zealand and South Africa have also provided 12 of the 17 previous winners.

Furthermore, 10 of them have been All Blacks, including the last six, and Barrett is seeking to emulate McCaw and Dan Carter as a three-time winner, and in the process becoming the first man to win three in a row.

The only Irishman to win the award was Keith Wood in its inaugural year of 2001, since when there have only been four other Europeans, Fabien Galthié in 2002, Jonny Wilkinson in 2003, Shane Williams in 2008 and Thierry Dusautoir in 2011.

Looking ahead to these awards after being honoured as the Guinness Rugby Writers of Ireland Player of the Year last Wednesday night, Sexton said: “Awards are obviously very nice to win, you’d be lying if you said you’re not happy after it but it’s not something you set out to win because at the end of the day it’s opinion.

“Like, not everyone will have chosen me for this award, that’s opinion and the best thing about having success is that no-one can ever take that away from you. No-one can say ‘he didn’t win that’, I can say, ‘yes, I did win that trophy’. That’s the best thing about winning, it’s not opinion, it’s fact. These are nice awards but they’re not going to be unanimous decisions, whatever award it is. But look, I’m very privileged and honoured to receive it.”

Sexton has served his time and, pound for pound, is probably playing better than ever. He ticks every box, be it passing, directing the play, distributing with that golfer’s swinging action of his, or his line and tactical kicking. He seems to be as tough, if not tougher than ever.

Brave to a fault, he’s never shirked the physical stuff. The All Blacks continually went down his channel last Saturday and if they didn’t he still went looking for defensive work, making 11 tackles in all. All the while engaging with his own players and, eh, sometimes the referee and opponents, he then somehow calms down his heart rate to take the shots at goal, and has become a world-class goal-kicker.

Sexton has landed 39 out of 50 kicks at goal for Ireland this year, for a ratio of 78%, whereas Barrett has landed 34 out of 48 for a 71% return. Admittedly, Barrett has scored another seven tries this year, including four in one extraordinary, 30-point performance against Australia at Eden Park last August. This takes his tally to 31 in 72 tests, the most by an outhalf in the history of test rugby, and he’s still only 27! Barrett has scored 115 points this year in test rugby, Sexton 96.

But, but contrast, Barrett had a relatively mixed bag of a year, being on the losing side twice. In the defeat to the Springboks in Wellington, Barrett missed four out of six kicks at goal.

What heightens Sexton’s chances of breaking the All Blacks’ monopoly on this award is that the two players went head to head last Saturday, and the panel did not make a final decision until this week.

Even Joe Rokocoko admitted before the game that he saw this it as a shoot-out for World Player of the Year. “I think this game will dictate who is the best number 10 in the world at the moment.”

If so, then there should only be one winner, one Johnny Sexton.