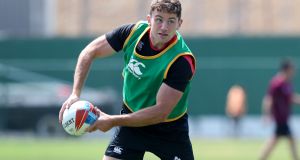 Hugh Keenan: named at fullback in the Leinster side to host Ospreys at the RDS. Photograph: Billy Stickland/Inpho

Leinster have a large clutch of players resting and seven involved in the game against the USA on Saturday. To that backdrop the Pro 14 saddles up with a number of players eager to state their cases.

“It is going to be a great opportunity for us to invest in our young players,” said Leo Cullen. “It will be great to see some players, hopefully, make their debut for Leinster. It is an exciting time for those guys.”

Among them are UCD and Leinster Academy player Hugo Keenan who is named at fullback for his first start. Nineteen-year-old former St Michael’s College pupil Scott Penny, in his first year in the Academy, also makes his senior debut at openside flanker. He brings an eye-catching eight tries from seven games in the Celtic Cup.

With Jimmy O’Brien and Jack Kelly named on the bench, there is also the possibility of two further senior debuts.

James Lowe will expect to light up the RDS and, with Scott Fardy captaining the side, there is some ballast too. Hooker James Tracy and winger Adam Byrne may feel they have been forgotten by Joe Schmidt and they see this match as opportunity.

“All I can do is look after my game and the rest will look after itself,” said Tracy. “You are sick of hearing that but that’s literally it. If I could control the coaches I would. ’Til someone figures that out I have to do what I can myself.”

Leinster are used to playing in the Pro14 with shadow sides. This is another one – but with enough quality throughout to get the job done and keep them ahead of Ulster at the top of Conference B.