Ringrose to start for Ireland against the USA 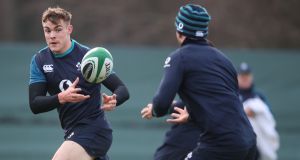 Garry Ringrose is the only player from the first XV retained for the match against the Eagles. Photograph: Dan Sheridan/Inpho

As expected, Ireland coach Joe Schmidt has named an almost unrecognisable team from the one that beat the All Blacks last weekend for this Saturday’s final November international against the USA (kick-off 6.30pm).

Outside centre Garry Ringrose is the only player from the first XV retained for the match against the Eagles while Joey Carbery, Iain Henderson and Jordi Murphy - all introduced off the bench against New Zealand - will also start this weekend.

Scrumhalf John Cooney will make his first Ireland start - the Ulster man had been confined to a replacement cameo in Chicago against Italy earlier this month - but Ross Byrne has to settle for a place among the replacements.

With Robbie Henshaw sidelined and Bundee Aki not involved, Stuart McCloskey wins his third cap, a year after winning his second and almost three years after his first.

Darren Sweetnam, hitherto unused this month, and Andrew Conway, who was on the wing in Chicago and a replacement against Argentina, are included in the back three.

Tadhg Beirne will have the chance to kick-start his Test career and will earn his fourth cap and second start, while his Munster team-mate Sam Arnold could make his Test debut off the bench.

“This was always part of the plan to make the changes, the two games book-ended the series and it’s a chance to look at all of the 43 players across the four matches,” said Schmidt. “Tadhg (Beirne) has slotted in so well, coming off the bench a couple of times in Australia in the summer, and bedding in as part of the broader squad.

“And I thought Iain Henderson came on and did really well last week against New Zealand.

“Tadhg has a really instinctive feel for the game; his running lines, his ability to get into the right defensive positions. Those things are a little bit intuitive, and it’s great to coach a guy who tends to know where to be most of the time.”

Stephen Kenny: Ireland reaching the Euros would be ‘extraordinary’ 15:07
Ben Youngs pens a new deal with Leicester 12:05
Solskjær says United’s unbeaten run is ‘nowhere near’ enough 11:53
Eric Dier given four-game ban for confronting fan in the stands 10:59
A glimpse of rugby’s future; assessing Herbert Chapman’s impact on soccer 07:15
Crossword Get access to over 6,000 interactive crosswords