Conor Murray primed for first appearance of the season 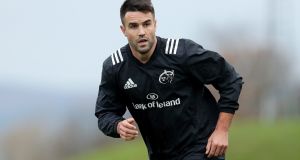 Conor Murray and Chris Farrell return for Munster on Sunday as Johann van Graan’s side seek a sixth Pro14 win of the season.

Munster travel to Italy this evening ahead of tomorrow’s clash with Zebre and as well as the tough expedition to Parma, Munster have to cope with a five-day turnaround after this game with Edinburgh up next in Cork. The southern province are primed for a tough challenge despite never losing to tomorrow’s opponents.

Italy play New Zealand in Rome this afternoon and as a result we see an understrength Zebre, but six of the squad have been released by Conor O’Shea with Giulio Bisegni and Jimmy Tuivaiti named to start.

Munster, too, have named a very different side although both Murray and Farrell are named on the bench following their lengthy injury lay-offs.

“Over there it is difficult. They are a tough side,” said Munster coach JP Ferreira. “They beat Cardiff, they beat Bristol Bears a while back.

“They are the second highest team at keeping the ball in the league, they don’t kick it that often, so I am expecting a high-paced fast game, an offload game and the physicality will be up there.

“They have big ball carriers. Some of their internationals might be out, but I think it’s through their squad that is what they will do.

The much changed Munster team sees Ronan O’Mahony named for the first time this season, while flanker Gavin Coombes is handed a first start after his appearance against Cheetahs last time out. Conor Oliver is also on the bench after a foot injury, while Tyler Bleyendaal captains the side from inside centre, where is paired with Rory Scannell.

Michael Bradley’s Zebre have handed a first start to former Northampton Saints winger Jamie Elliott, while flanker Maxime Mbandà makes his first start of the season after the knee injury he sustained in the Six Nations.

Despite still being without their Ireland internationals, Ferreira is satisfied with Munster’s second place in Conference A and feels they will be well represented in Italy.

“We’re on the right track so far. We are now through our first block and it’s definitely where I want to be.

“We are improving our depth in the squad and they’re getting a feel for me. Every week is so much easier.”