Conor Murray is back in the Munster squad for Italian job 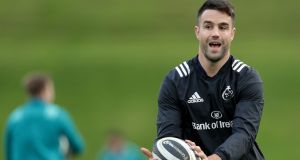 Conor Murray has not featured so far this season. Photograph: Laszlo Geczo/Inpho

Conor Murray is back on the Munster matchday squad for Sunday’s Pro14 encounter with Zebre at Stadio Sergio Lanfranchi.

Murray’s last competitive action came during Ireland’s successful summer tour of Australia, and he is yet to feature this season.

Chris Farrell and Conor Oliver also make their return to the matchday squad and are both named on the bench, while Ronan O’Mahony makes his first appearance of the 2018/19 season.

Tyler Bleyendaal continues his captaincy from inside centre and academy player Gavin Coombes makes his first start in the Pro14.

There are several changes to the starting XV who claimed a 30-26 win over the Cheetahs in South Africa earlier this month.

Mike Haley continues at fullback as O’Mahony returns on the right wing with Alex Wootton maintaining his position on the opposite flank. Rory Scannell starts in the 13 shirt with Bleyendaal completing the centre partnership.

Neil Cronin and JJ Hanrahan combine in the halfbacks.

The pack sees Jeremy Loughman, Kevin O’Byrne and Stephen Archer in the front row with Fineen Wycherley and Darren O’Shea partnering in the second row. Coombes is joined by Chris Cloete and Arno Botha in the backrow.