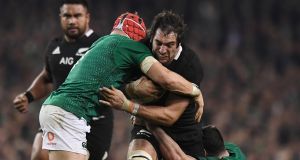 It has ever been thus. Within minutes of New Zealand coach Steve Hansen diffusing Ireland’s win with a shrug, a deadpan, jokey mien and suggesting that, well these things do happen, lock Sam Whitelock was also selling a mood music of no panic.

From that we could reasonably deduce that the All Blacks have been quietly rattled.

Ireland were like an itch New Zealand couldn’t scratch. While Hansen declared “Ireland are the world’s best” there was no serious talk of paradigm shifts.

Rugby is not a world title fight. But there were few around Aviva Stadium that refused to accept Ireland as currently the best pound for pound team in the world.

Whitelock and his 106 caps was new to this stuff. It seemed less like Ireland’s second win in the last three matches than grit in the All Black ointment. In Chicago it was Patrick Tuipulotu and Jerome Kaino starting with Scott Barrett and Ardie Savea on the bench.

“Like we threw a lot at them, especially in that last 20, and they defended well and didn’t let us attack,” said Whitelock.

But Whitelock was as grooved as Hansen with his disdain for shovelling too much praise Ireland’s way or too much criticism towards New Zealand. Defeat seemed almost a transient, abstract concept that would right itself in time for Tokyo next year.

Maybe it was the Kiwi mindset. Joe Schmidt, deep down aware of how he had wounded his own country, was also self contained.

Like the flares spewing out of the back of aircraft to distract heat seeking ordinance, Schmidt filled the room with possible reasons for New Zealand’s failure. A long Rugby Championship season, thousands of miles of air travel and missed opportunities that on another day would have been devoured.

To that backdrop the Irish pack brought rugby with ferocity, edge and aggression rarely seen outside the octagon.

But Whitelock didn’t talk of the All Blacks becoming unnerved, or the endless supply of Irish bodies for a defence that knocked them back, or their own missed passes, dropped balls and ultimately lack of ideas.

“Yeah, it’s always tough no matter who you’re playing against and tonight was no different,” said the secondrow seamlessly underscoring Ireland as no different from any other team.

“It was a good battle out there and some big boys running straight, so there’s some sore bodies and I’m guessing they’ll be feeling the same.”

To his credit the suite of reasons for New Zealand’s performance earlier couriered from Schmidt were not taken up. In that the All Blacks never change. There are never excuses.

“That’s the beauty of playing Test match rugby,” said Whitelock. “It doesn’t matter if it’s the first one of the year or the last one, you’re always excited to get out there and show the world what you’ve got and tonight was no different.

“The boys were definitely up [for it], we had a great week of preparation and it’s just a pity we didn’t play the way we wanted to. But they didn’t allow us to do that.

“I think the key things for us is that it’s a different style up here,” he added. “It’s something that we’ve got to adapt to and we’re probably taking a little bit of time to do that.”

The World Cup can’t come quick enough and Ireland have now established a rivalry for the modern age that few could have thought would materialise. The rise and rise of the team has fixed the All Blacks and their hard-earned sense of superiority. That mindset has been disrupted.

Schmidt has figured out how to beat New Zealand and put a squad together that can execute as he demands. Whitelock’s apparent lack of concern about that could be construed as either denial or real panic creeping into their thinking and the World Cup.

“It’s funny, as a player you hear all the talk about World Cups and stuff but it’s still a long time away,” he says defensively.

“For us, we’ve got another Test match and then we’ll go on a break, so there’s plenty of time and plenty of rugby to be played before the World Cup. But it’s something that we’re aware of. It was a great Test match.”

Whitelock’s debut for New Zealand was against Ireland in 2012, the same day as outhalf Beauden Barrett swept on to the scene. That day New Zealand thrashed Ireland 60-0 in Waikato Stadium. Quite a points swing. Who wouldn’t be dazed by that?