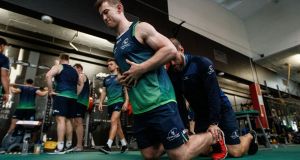 Victory over Dragons last time out has Connacht and Tom Farrell on a high as they seek to conquer South Africa – starting with the Southern Kings.

Connacht only trail second-place Munster by three points ahead of the first game of their tour against Kings in Port Elizabeth and, buoyed by a bonus-point win last time out, Farrell is keen to get stuck in.

“The Dragons win was huge for us, we needed a big performance after losing in Ospreys,” said Farrell.

“Looking at the Kings they are a very different beast when they play at home. They picked up a good result against Glasgow a few weeks ago and also put it up to Leinster. They have some serious athletes and some dangerous broken field runners.”

Farrell is paired with Australian international Kyle Godwin in the centre for their first game on tour in Port Elizabeth, while Matt Healy returns to the left wing following his recent injury problems.

Captain Jarrad Butler is named at number eight, with Paul Boyle – who this week signed a new 2½-year deal – providing the backrow cover from the bench. There is also a place for prop Dominic Robertson McCoy on the bench for the first time following his six-week suspension for stamping on Josh van der Flier.