The Game That Was: James Ryan finally loses a match

Joey Carbery is not ready. And so it’s back to Johnny Sexton to salvage the series 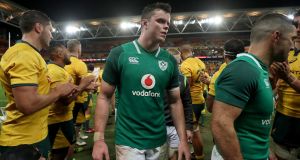 Man of match: Kurtley Beale and Israel Folau push David Pocock for the reward. The Wallaby flanker of Zimbabwe birth scored the killer try while his work over Irish ball remains the best the game has ever seen. Marius van der Westhuizen’s poor refereeing of the breakdown denied Pocock two more penalties.

Moment of the match: Has to be Pocock’s try (following Folau’s freakish high fielding) which, again, came from a bad referee call: Jacob Stockdale was tackled near the Ireland line. He was released. The ball was also released. The Ulster winger has every right to pick up the ball and play on. Van der Westhuizen disagreed. Australia made full use of the gift.

Coach’s call: Joe Schmidt had to look at Joey Carbery in the 10 jersey against a tier one rugby nation before next year’s World Cup. He is not ready. Carbery and Schmidt need the Munster move to pay off but it’s back to Johnny Sexton to salvage the series.

Quick quote: “If he asked the other question,” says Joe Schmidt of the officials disallowing CJ Stander’s try.

1 Gerry Thornley: Talk of Anglo-French hegemony is over the top
2 What next for green jersey hero Sam Bennett after the toughest of Tours?
3 The Offload: Saracens prove Pro14 is not fit for purpose
4 Two medals in one day: the daunting task facing Galway’s Daithí Burke
5 Born to ride, born to win: Sam Bennett, the making of a green machine
Real news has value SUBSCRIBE

Manchester City get off to winning start; What’s next for Sam Bennett? 06:55
Doctor Duffy leads the betting for Wednesday’s Kerry National 06:00
Different Strokes: Bryson DeChambeau wants to go further 06:00
Shane Lowry brings the X-Factor to an Irish Open like no other 06:00
Netflix to capture Hamilton’s bid to equal Schumacher’s record 06:00
Crossword Get access to over 6,000 interactive crosswords