Gerry Thornley at the Suncorp Stadium 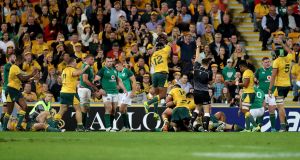 It entertained and fluctuated far more than the final scoreline suggests, but in the end, although Ireland will have regrets aplenty, they can’t have too many complaints after this defeat on a balmy, dewey night in Brisbane which disappointed a huge chunk of Irish supporters in the 46,273 crowd.

So the Irish record of 12 successive wins was brought to a halt by an 11th successive defeat to the Wallabies on Australian soil, and they must now respond with wins in both Melbourne and Sydney to complete a first series win here since 1979.

But Ireland’s first three-Test series in Australia has just become a whole lot tougher, given the Wallabies, whose work-rate, oomph off the bench and durability over 80 minutes will have thrilled Michael Cheika, and given his players an injection of confidence.

True, Ireland can restore Dan Leavy, whose energy and physicality were missed as Australia gradually stemmed Ireland at he breakdown, and Garry Ringrose. They can also start Cian Healy, Tadhg Furlong and Johnny Sexton, but they were leading when the latter replaced Carbery, who overall had a decent game, looked composed and made few errors save for a missed penalty.

Although the accuracy of their carrying and clearing out earned more possession and territory, going though seven-plus phases 10 times, in truth Ireland weren’t quite themselves, not least in failing to turn possession and territory into points, albeit the Wallabies probably left more behind. But winning a game away with just three penalties is a tough ask, and for all the ballast of Bundee Aki and Robbie Henshaw, they looked a little blunt in midfield.

Over the course of 40 games in both codes at Suncorp Stadium, Folau has scored a faintly ridiculous 35 tries, and this has included seven in nine games for the Wallabies. But although he had what should have been a legitimate try ruled out here, it was his supreme ability in the air which left the game’s most lasting impression. Australia, and particularly Kurtley Beale, continually sought him out, as did Ireland a tad too often.

Folau’s strength in the air was immediately to the fore, taking Carbery’s kick-off and, with Beale playing as an auxiliary fullback, the latter’s up-and-under was chased by the Wallabies’ ‘15’. Kearney was adjudged to have knocked the ball forward under pressure from Folau, although the ball seemed to go back and then off Folau before Aki played the ball from a supposedly offside position. It looked a bad call as Bernard Foley opened the scoring.

Murray wasn’t too happy when judged to have knocked on at the base, a couple of phases after his anticipation and feet helped avoid the worst of a huge hit under a high ball from Marika Koroibete, but that was soon negated by Henshaw poaching for a penalty.

The Wallabies started drawing a few lines in the sand with a sequence of monster hits, Beale on Murray, Samu Kerevi on Kearney and Michael Hooper on Carbery. Those in gold ‘oohed’, and Cheika assuredly loved them.

When Genia was tackled into touch by O’Mahony following his own grubber, the Wallabies kept flying up from the ensuing pressure off the attacking line-out, but Foley was too quick off the line and Carbery levelled matters.

The Wallabies cranked it up, following another clean take by Folau above Jacob Stockdale from Murray’s box kick. Going wide left from a line-out, Beale stepped Henshaw when the Irish centre gambled and shot out of the line, and linked with Marika Koroibete, but his opposite number tracked across the pitch to make a brilliant try-saving tackle.

Helped by O’Mahony’s strength over the ball, Ireland exited, although in an aerial duel Earls was accidentally caught in the jaw by Dan Haylett-Petty. A lovely Irish strike move off the training ground, Murray and Carbery each pulling the ball out the back as the centres were used as decoys, released Stockdale coming around from the opposite wing, but Folau read Earls’ chip. Earls then walked off to be replaced by Larmour, but after Aki and Henshaw trucked it up off the ensuing line-out, Pocock ignored pleas from van der Westhuizen and Carbery edged Ireland in front.

Ireland kept probing, a trademark switchback inside nearly releasing Carbery before Stockdale was worked into space only for his grubber to drift out on the full. An offload by Herring almost put Aki in under the posts but it skewed forward before, instead, the Wallabies struck out of the blue.

The platform came from Kearney dropping a long clearance kick from Genia. From the ensuing line-out, this time it was Foley who saw Henshaw shooting up and moved the ball on to Koroibete. Against a backpedalling fringe defence, he straightened, as did Dan Haylett-Petty and Kerevi in turn before being stopped by Stockdale, before Foley sped on to Genia’s blindside pass to take Kearney’s tackle and score.

Ireland looked a little stretched and vulnerable until half-time, and were grateful to see Murray kick scrum ball into the crowd to bring it to an end.

No scores sought in overtime this time, but nearly one within three minutes of the resumption. James Ryan broke Foley’s tackle to release Stander for a 30 metre gallop to the line but he was hauled down by a combination of Haylett-Petty and Koroibete, and despite Herring’s clear-out, couldn’t ground the ball.

Ireland went through 19 phases before Pocock showed his strength over the ball again. Herring then brilliantly claimed an overthrow by debutant hooker Brandon Paenga-Amosa - more than no-one was lifted - which effectively earned Carbery a 45th minute penalty, only for the out-half to miss from 40 metres. This was compounded by another turnover by Pocock and one by debutant replacement Pete Samu.

They felt big, but when Pocock went off his feet, Carbery kicked Ireland back in front before being replaced by Johnny Sexton, with Sean Cronin completing a new front-row at the same time.

But Ireland enjoyed a huge let-off when Keevi’s tackle on Henshaw helped earn a turnover, from which Beale’s diagonal run sucked in James Ryan, Tadhg Furlong and Cronin before Foley released Folau for a clear run to the line as Stockdale came in. But the try was over-ruled after the TMO, Kiwi Ben Skeen, brought his attention to an incident off the ball, and van der Westhuizen adjudged Coleman had taken out Ryan off the ball and pinned the Irish lock to the ground. All of which was true, but it had no material effect whatsoever on the ‘try’.

Ireland were also relieved when Kerevi knocked on short of the line after 14 phases, but when their defensive scrum was shunted off their own ball, Foley kicked Australia back in front. When Folau again sailed high into the skies to gather a cross kick by Beale and offload to Kerevi, Genia chipped the quick ball into space and Stockdale was penalised for playing the ball after the ruck had formed in the opinion of van der Westhuizen.

Leading 9-8 in the 71st minute, Australia opted for a tap penalty near to the posts. Generating lightening quick ball of Pete Samu and their other big carriers off the bench, there was an inevitability about the try which came with Pocock steaming onto Genia’s pass, and Foley’s conversion made it a two-score lead.

There might have been a nail-biting finish after a thunderous bust and deft offload by Furlong which Aki added to, but van der Westhuizen adjudged Murray had knocked on at the base before the ball was moved wide for Jordan Larmour to step the last man and seemingly score.

To compound this, a close-range finish by Kieran Marmion, after good carries by Aki, Cronin and Stander off a line-out drive, was ruled out for what was a debateable fumble on the ground by Stander by Mr Keen. Ireland deserved to be closer on the final scoreline but on balance, Australia deserved to win.

Heartbreak for Tuohy and O’Connor as Tigers down Cats 13:14
McIlroy well off pace as Thomas leads low-scoring Zozo 10:24
Seán O’Brien: Anger over my parents’ break-up never left me 09:30
Touching response to Marcus Rashford’s clarion call reveals very best of England 07:00
Michael Walker: Is De Gea an answer again amid the questions at United? 06:00
Crossword Get access to over 6,000 interactive crosswords