Greg Feek is happily adapting to his dual responsibilities 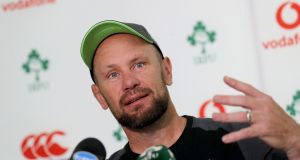 Feek is happily adapting to his dual responsibilities, which will see him continue as Ireland’s full-time scrum coach into a fifth season until the conclusion of the 2019 World Cup.

Having linked up with the squad for the first time since the Grand Slam coronation in Twickenham on Monday, Feek declared that Ireland had a fully fit 32-man squad to pick from in Saturday’s first test against the Wallabies.

“Yes, we’re looking pretty good at the moment. This is probably our big day since the tour started so hopefully we get through today and we know where we’re at. At the moment it’s pretty good.

“You couldn’t time it better in terms of turning up here when the weather’s good but also Brisbane, the Gold Coast, it does help waking up with a bit of heat, big yellow’s in the sky and it does mean adapting in. Boys were up early and the body clock will start to kick in, that’s all part of our preparation for the Test as well.”

As for the Wallabies, Feek said: “A lot of the Leinster guys have had Michael Cheika as a coach and they know that he drives them pretty hard in terms of the physical side of the game. You know they’re going to come out and try to win some of those physical confrontations, so you’ve got that and you’ve got some massively X-factor players who can turn over the ball.

“If you don’t look after it, it could be seven points. So, yeah, there’s an expectation there that it’s game where you’ve got to be clinical in what you do. Entry points into a Test match could be ill-discipline or a dropped pass that allows them back in. So, it’s probably one of the things we’ve been driving - to limit our mistakes and stay in the game that way.”

Looking ahead specifically to Saturday’s first test, Feek said: “The boys have watched a bit of Super Rugby and the challenge of Test match footy is coming in that first week and trying to put something together that you’re about. That’s what their challenge will be and if you look at how their Super Rugby teams are playing, they’re playing some pretty good rugby in terms of tries scored and a physical approach. They’ve got some exciting players that the fans here will be looking to see get their hands on the ball.

“You’ve got to get the balance right, we want to get our own stuff right and get that fit-like-a-glove feel going again for some of the boys, but you’ve got to keep an eye on what’s coming because it’s a dangerous team.

“They have performed well over the last few years and like I said, the way some of the Super Rugby teams have been playing - I think the Reds have been unlucky a few times not to win some games. The Waratahs are going pretty well and even the Rebels beat the Blues the other day.

“The headache for the coaching group of Australia is who they actually select as their starting team and that’s a positive. We’ve had a look and you look at the referee, the conditions, everything. But the priority would be to make sure we have what we stand for and what we’re about for the week.”

Feek has been taking on a broader coaching ambit with the NEC Green Rockets and said: “It’s been great, I’m there just over two months so getting my head around it. It’s always part of the challenge adapting to cultures and that but I’ve enjoyed it.

“It was more of a family-first sort of thing, getting the wife home and then from that I scratched my head and then this opportunity literally came up within weeks and it was a progression for my coaching as well, and a lot of benefits around that.

“I felt that it fitted with what’s happening next year. It allowed me to stay on with the Irish team to the World Cup. So in terms of personal development and staying in the game, which is always a challenge as a coach, I just thought I’d take it and go with it.”

He maintained that the dual role should not unduly affect his ongoing work with Ireland.

“I won’t be there [WITH IRELAND]full-time but it won’t change too much. The provinces do a great job, the communication is pretty straightforward. Most people have some sort of app to stay in touch, it’s just a matter of making sure you’re using the right one. Apart from that, we’ve got good relationships.

“I’ve known Joe long enough that I can almost predict when he’s going to call me, so I’ll email or text him first. I try and do that at four o’clock in the morning to pay him back for some of the emails he’s sent me at that time.

“We all get on really well together in the coaching group, we have some good fun, and I was really looking forward to catching up with the lads again, not just the players.”