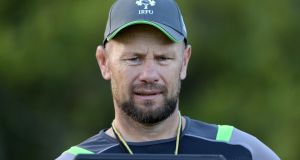 Feek this week resumed his remit as Irish scrum coach for the first time since the Six Nations, and will continue in the role until the conclusion of the 2019 World Cup. But for the past two months, Feek has also been coaching in Japan with NEC Rockets in Abiko, and he will continue to for the rest of a one-year contract.

Feek has clearly been rejuvenated by the experience of an expanded coaching role, as well as a completely new culture and language. Indeed, the way he tells it and the way he sells it, the World Cup in Japan can’t come around quickly enough.

“I love this city,” he said, on his return to Brisbane. “I had an injection of positivity in seeing all the lads as well. I haven’t seen them for a couple of months. That was probably a part of it.”

He was also put on media duty.

“I said ‘Thanks a lot!’ I’m half-laughing as well, getting really set up, but nothing personal against you guys. It is always a little bit of an ‘Oh s**t, I’m on media’, because you don’t want to say the wrong thing and because I haven’t been living in Dublin. You’ve got to make sure you’re up to speed.”

Feek first moved to Ireland to work with Joe Schmidt and Leinster as the province’s forwards coach in 2010, and having dovetailed this with the Irish pack, has been Ireland’s full-time scrum coach since 2014. The former All Black tight-head hadn’t intended to stay that long.

“I told the wife it would be two or three seasons, and after five she was like: ‘What’s happening?’ She put the life on hold a little bit then, because she understood these opportunities and who I was working with and how everything was going.

“She saw how excited I was when I first arrived about the potential and the people I worked with but her time came to an end and I just put that first. I said ‘Right, if you need to get home, get home’ and in that period it was only two weeks and the club [NEC Green Rockets] found out, contacted me and I just thought it was a good fit for my coaching development going forward.”

With his family in Canterbury, he is using Japan as a halfway house between home and here, as well as Ireland next November and for the Six Nations.

“It means next year is going to be full-on for me but I feel that I don’t want to die wondering in terms of giving it a crack. I’ve always challenged myself. Going to Ireland was a big call and I thought, ‘If I can do Ireland and that side of the world, I can do Japan.’

The language has been tricky. “But it’s like any team – you get into the team culture and you get to know the boys, they get to know you. Communication starts to come a little bit easier.”

“You don’t have to say arigatou gozaimasu [a formal thank you] the whole time. You can just say aimas, just shorten everything. In the mornings, you go ‘aimas.’ ”

“I’m also starting to learn a bit of rugby slang. You learn people’s names and even when you’re learning a name, I won’t say it unless I can pronounce it properly. I was a little bit mute to start with, just out of respect, but all those little things are important.

“It’s a very respectful culture and the coaching has probably been the thing that’s really stood out ... There’s two of us there, so you’re pretty much involved in everything.”

And just as the Irish players have found, Joe Schmidt’s ways have seeped into his head.

“Sometimes I’ll turn around because I thought I heard Joe talking but it was coming out of my mouth, just because I’ve been with him so long,” he says, laughing. “I might have used a Faz-ism at one stage as well: ‘Go, Lad go.’ Not that I use that but it’s his northern English accent.”

“You start realising what you have learned by osmosis, but also I’m realistic that I have an area of the game that I still want to be an expert in, so you’ve got to keeping that chipping away, so the boys have loved that, trialling things. They love detail, similar to the Irish boys.”

He’s also been learning about both himself and the game.

“Time management has become something that I’ve really nailed. I’m getting on top of that, and energy management as well. But the learning has been great and I have picked up some good things for the World Cup already, just the littlest things that might just help make things beneficial for us.”

Ireland’s pivotal opening game against Scotland in Yokohama is on September 22nd, and Feek forewarns: “The humidity increases from about now until September, if not part way through September. So you’ve got to make sure that you’re drinking lots of water, that you’re keeping hydrated because you suddenly can just be feeling drained. That could be dehydration. The balls become a bit more slippery because your hands are dripping [sweat]. You also have to take a few more shirts.”

“Food-wise you can find all the food you like,” he says, adding: “Even the language – they’re talking about having a [device] around your neck where you talk and it comes out in Japanese. If they don’t have it for the Rugby World Cup, they might have it for the Olympics.

“There’s lots of little things they’re going to do that the tourists who go there are really going to enjoy. There’s so much to do. Someone was telling me you can go to Kyoto and see these monkeys that come down from the mountains in the mornings and jump in these pools. There’s waterslide parks near Narita airport; plenty to do for people that are over there.”

“The further you get out of Tokyo, cost-wise as well, things drop down quite considerably and you can go and get yakitori or ramen and all the other kinds of Japanese food that are just incredible. Here could be a place that just looks like a garage, you go in and sit down and then suddenly this amazing meal turns up.

“You talk to people that have been over there for years and they’ve very helpful in terms of where to go and do things. The train system is incredible, just so easy.”

Feek lives near a town called Kashiwa, where the All Blacks are going to be based, and is based about 40 or 50 minutes northeast of Tokyo or the airport by train.

He works from 7am until 6.30pm most days, but with so many Kiwi former teammates in Japanese rugby, he has managed a few reunions, combining this with some sight-seeing such as when meeting up at Tokyo’s Skytree, while also taking in some Sunwolves games in Super Rugby.

It is an amazing country, he says. “How mindful they are of others really stands out; the cleanliness, the orderly queuing up. I think the World Cup will be good fun. I think everyone will really enjoy it.”