Will Genia under no illusions about the threat Ireland now pose 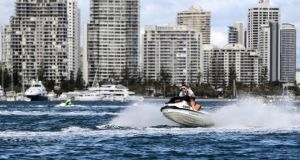 Peter O’Mahony out jet skiing during the Ireland squad's down day in Brisbane. Photo: Dan Sheridan/Inpho

Time was when the Southern Hemisphere superpowers were all too evidently ignorant about Irish sides, trotting out clichéd stuff about pride and passion, while struggling to think of anyone in their ranks bar, of course, Brian O’Driscoll. Will Genia yesterday admitted he used to fall into that category.

However, experience has taught the 30-year-old differently. In five meetings with Ireland, Genia has only been on the winning side once. Part of the 20-20 draw at Croke Park in 2009 when O’Driscoll rescued Ireland with a late set-piece try, Genia was then memorably frogmarched by Stephen Ferris in Ireland’s 15-6 World Cup pool win in Auckland’s Eden park in 2011. He has since played in the Wallabies’ last three treks to the Aviva Stadium, the win over 2013 and the defeats of 2014 (as a replacement) and 2016.

On top of which, of course, Ireland’s record under Joe Schmidt, also including wins over New Zealand and South Africa, as well as this year’s Grand Slam, demands respect.

Genia, along with Kurtley Beale, loosehead Sekope Kepu and tighthead Rob Simmons, who was on the bench that night, are the only four players from their match-day 23 that night who are in Cheika’s current squad.

“When I look back on that game, we probably underestimated them. That was probably disrespectful and they taught us a lesson which was good for us. Coming into this game, we cannot underestimate them at all. They are obviously number two in the world but more than that, just the level of rugby they have been playing.

“I have said it before, it is all about attrition with them. They are good at retaining possession but aside from that, you have got Sexton who can sit back in the pocket, you have Conor Murray, whose box kicking puts pressure on you in that sense. They have got a pretty good game but more than anything, they really understand their game plan, and execute it really well.”

When it was pointed out to him that Ireland had also won the Grand Slam two years before that World Cup defeat and had beaten Australia a few times over the previous decade, he cited: “The style of rugby they play now. They have big game players now too.”

Back then, the then 23-year-old Genia had been a key part of the Reds’ team that had won the franchise’s first Super Rugby title earlier that year, had been chosen as Australia’s Super Rugby Player of the Year and had cemented his place as the Wallabies scrumhalf over the three previous years.

“To be honest, I was probably ignorant back in 2009 of what they achieved that year. I was young, probably a bit ignorant – they had O’Gara, O’Driscoll, O’Connell.”

Unlike himself back then, he believes that the younger players in this Wallabies squad will be more respectful of the threat posed by this Irish side.

“I think guys just know more now. Social media is a thing that has played a part in that. People take more of an interest now. They know the Sextons, the Murrays, the impacts they have had at club level, winning with Leinster and all that sort of stuff. There is no chance of us underestimating because people just know too much.”

Indeed, Genia’s opposite number is a graphic illustration of all of this. Murray had only just broken into the Ireland squad in that 2011 World Cup although played a big role that night off the bench, but has since become a thrice Six Nations title winner and Grand Slam winner, as well as a two-time Lion.

“He is a big guy. He is very strong, he can be physical,” said Genia of his counterpart. “His tactical kicking, he does it better than anyone else, which creates a lot of pressure. They chase it well and when they get that ball back, they are 30/40 metres down the pitch and on the front foot. That is a big part of his game we have spoken about.”

The flip side of generating this new-found respect is that Ireland have become a more prized scalp. Asked what a series win would mean to Australia, Genia said: “It would be huge. To get the chance against the second-best team in the world three games in a row, it would be a huge thing to get a series win. And I guess it would be a big confidence booster for us to get heading into the Rugby Championship which is always tough.

Genia has been back to his best form since returning to Australian rugby with the Rebels after his two-year sojourn to Stade Francais. The 33-year-old’s importance is such that he seems sure to win his 89th cap on Saturday at nine even though he has only played once in the last seven weeks.

Having been sidelined for two weeks with a hamstring strain, Genia suffered a low-grade strain to his medial collateral ligament in his knee against the Crusaders on May 4th. But although he missed a third game in the ensuing time span when the Rebels beat the Blues 20-10 in Auckland last Saturday, he maintained: “It has progressed really well. I knew if I took an extra week off then I would be 100 per cent for this week. It is just about finding some rhythm and I’m ready for Saturday.”

Since losing the 2015 World Cup final to the All Blacks in Twickenham, Australia’s results have not been especially impressing, winning 13, drawing two and losing 14 of their ensuing 29 matches.

“We have probably gone through a transition period where we have tried to introduce a lot of new players and regenerate the squad,” said Genia. “There have been 20 to 25 debutants in that time and Cheiks has settled on who his core group is and it is about moving forward through that. We have obviously had some disappointing performances but we feel we are heading in the right direction.”

For Genia, this game has particular resonance as he is back in his home city and the ground where he has had some of his greatest days. The Wallabies lost their first game after the World Cup final in the corresponding series opener against England here in Brisbane’s Suncorp Stadium two years ago but since then have beaten South Africa, Italy and most recently New Zealand by 23-18 last October.

“We always play well in Brisbane. For me we always seem to play better here than anywhere else and I feel a lot of the guys will say the same thing. But I think more than anything, the Super Rugby teams, the guys have been performing pretty well. Conditioning-wise, guys are in good shape.”