Wallabies’ Will Genia fit and raring to ‘rip in’ to Ireland 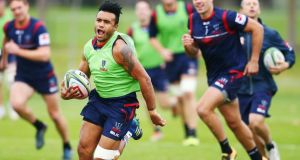 Australia’s Will Genia has confirmed he is fit for the opening Test against Ireland. Photograph: Michael Dodge/Getty

Will Genia has confirmed he is fit to return to action for the Wallabies in the first Test against Ireland in his home town of Brisbane after missing the last four weeks with a knee injury. Genia is back to his best form this year after returning to Australia with the Rebels following a two-year sojourn with Stade Francais and remains a hugely important figure in Michael Cheika’s Wallabies.

The 30-year-old suffered a low-grade strain to his medial collateral ligament in his knee against the Crusaders on May 4th, but although he missed a third game in the ensuing time span when the Rebels beat the Blues 20-10 in Auckland last Saturday, Genia confirmed on Monday that his absence was largely precautionary.

“My knee feels good. The thing for me was always just for it to heal and for me to get that part of my body right. As far as conditioning and things like that, I’ve put in the work in the last two or three weeks, so from that point of view we will see when I get out there, if I get picked. I’m not too worried.

“I could have played for the Rebels. I was about 80 or 85 per cent but I still feel I was at a point where if I was out there playing I would probably hesitate a little. There was a lot of discussions there with the Rebels and the ARU and they came to the decision to have that week off.”

Genia has thus only played one game in the last seven weeks as he was returning against the Crusaders following a slight hamstring strain, but he didn’t believe he was too rusty.

“No, not really; not at all. I’ve put in the work. At the end of the day, footy is footy. I’ll back myself if I get the opportunity.”

The scrum-half’s eagerness to face Ireland is palpable, coming as it does with the a prevailing Australian respect for this year’s Grand Slam champions.

“They will be incredibly tough. They’re number two in the world; they’re playing some really, really good rugby. Statistically, they head a lot of the top-tier nations in a lot of departments. It’s going to be a tough game for us but it’s in our back yard so a lot of the guys are really excited to rip in.”

In particular, Genia highlighted Ireland’s “ball retention and discipline,” adding: “They give away the least amount of penalties out of the top 10 nations in rugby and they hold onto the ball for long periods of time.

“It’s going to be a tough test as far as our defence goes. In attack, we know we’re not going to get easy ‘outs’ as far as penalties go. I guess you could say it’s going to be a war of attrition in that sense and it’s something we have to prepare for.”

Ireland conceded only 34 penalties in their five Six Nations games, whereas Australia conceded 62 penalties in their last five games of 2017, the 23-18 Bledisloe Cup win over the All Blacks - the last occasion they played here in Brisbane’s Suncorp Stadium - and subsequent four-game end-of-year tour.

“We’re the worst as far as giving penalties away, and easy penalties, things like being offside, which is probably an attitude thing,” admitted Genia.

“The coaches are putting things in place to try and combat that. You don’t want to be giving away a load of penalties to a side like Ireland, who are going to kick their points and accumulate the scoreboard in that sense, put pressure on you from that point of view.”

That said, the Wallabies believe they have attacking strengths which Ireland haven’t encountered of late. “Yeah, I think just the nature of the way Australians play their rugby. We like to attack a lot and use the ball. The Wallabies in recent years, since Cheika has taken over, we like ball-in-hand rugby, so if we can bring that and play as well as we can with a few other threats we have - guys like Izzy (Israel Folau) and those aerial threats - hopefully we can find a good balance in our attack to test them with.”

Folau scored a stupendous try in the Waratahs’ thrilling 52-41 win over the Reds here last Saturday with a trademark leaping take of Bernard Foley’s crosskick. No less than Folau himself, Genia - who is expected to win his 89th cap on Saturday - wasn’t shy about publicly hailing this weapon when the same two players combine for the Wallabies on Saturday.

“I think with Izzy, if you put it there he is going to catch it. It’s about playing to our strengths and giving a bit of variety in our attack. If you can put the ball there, he’s going to catch it, I would honestly say, 10 times out of 10.”

In any event, Genia is itching to play in his home city again, having made his Super Rugby debut at 19 for the Reds, whom he helped to win the 2011 title over the course of nine years and 114 caps.

“I love being back here, Brizzy is my home. It’s a cool stadium, it’s my favourite place to play. Growing up here and playing the first nine or 10 years of my footy career here was great. I love the people here, how passionate they are about their footy and their sport in general. They get out there and you feel really part of it.

“The stadium is incredible as well. I’ve been fortunate to play around the world in pretty amazing places but Suncorp is definitely right up there.”