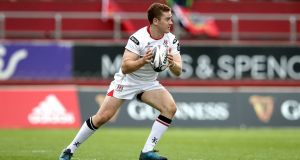 Paddy Jackson has signed for Top14 side Perpignan after he had his Ulster contract revoked. Photo: Ryan Byrne/Inpho

The continued unrest in Ulster rugby cannot calm until they fill the void left by Paddy Jackson as the 26-year-old begins the next part of his life in Perpignan.

The IRFU attempted to bandage this gaping wound with Joey Carbery but the 22-year-old refused to replace Jackson, instead moving to Munster on a two-year deal.

Similar terms were agreed by Jackson to join the promoted Catalan club, back in the Top 14 after four years, mere hours after Joe Schmidt named Carbery as Ireland’s starting 10 for the first test against Australia.

The sliding doors of each man’s career being evident for all to see.

Jackson, along with his friend Stuart Olding, had their Ulster contracts, both running to the 2019 World Cup, revoked in April following an IRFU review. Last March they were acquitted of raping the same woman in June 2016 with Jackson also cleared of sexual assault.

Olding was recently recruited by new Brive manager Jeremy Davidson as the former Ulster, Ireland and Lions lock is tasked with escaping ProD2.

Jackson hasn’t been allowed to play rugby since Ireland beat Japan in Tokyo on June 24th 2017 but Perpignan sporting director Christian Lanta confirmed the ‘blood and gold’ are pleased to sign “an established goal kicker and talented play maker” who “brings international experience to the team.”

That leaves Ulster needing David Nucifora’s permission before signing a foreign outhalf or some form of cover for the English-born Johnny McPhillips.

An imbalance currently exists across the provinces with Munster in possession of five senior outhalves while Leinster have Johnny Sexton, Ross Byrne and Ciarán Frawley along with Ireland under-20s duo Harry Byrne and Conor Dean in their system.

Jackson’s agent, Ryan Constable of Esportif, seemingly convinced Perpignan to sign the 25-times capped outhalf over Springbok Elton Jantjies, who was as an initial target for Ulster until Nucifora apparently intervened.

Schmidt further muddied the waters with his pre-Australia tour comments that on one hand confirmed the Ireland coach’s efforts to guide Carbery to Belfast before a cryptic comment about an Ulster deadline to recruit an as yet unsigned “foreign option.”

“The initial conversation with Leo [Cullen], with myself and David Nucifora, was not the best timing for any of us,” said Schmidt of the Sunday morning, April 15th meeting a day after Jackson and Olding contracts were revoked. “It was certainly not where I wanted to be at the time but I had a job to do. All we asked was, ‘Is there any interest for Ross or for Joey to go up to Ulster?’ Because Ulster were looking at the time for a foreign option. They needed to know by midday the following day so we had to see if there was any chance at all if any of our local number 10s were interested. If there was no interest it was probably a different story but there was a bit of interest from Joey at the time and then he mulled that over and I think he got an approach from Munster in the interim and that digressed then into a different conversation.”

Ulster “players and pro staff” voiced “great sadness” at the decision to release Jackson and Olding before adding, “We know that the two boys will be successful both on and off the pitch wherever they go.”

France always seemed the likely destination, even if both presumably took significant pay cuts to find a new team at this late stage of the season.

Earlier moves for Jackson to join Clermont and Sale were denied by both clubs. It is also believed that any chance of Ulster keeping their home-grown talent ended when key sponsors entered the post verdict discussion: “Bank of Ireland is highly concerned regarding the serious behaviour and conduct issues which have emerged as a result of the recent high profile trial.”

Perpignan only saw a potentially great player because in Jackson they have signed someone who, despite the looming court case, proved himself very close to the elite tier of international outhalves before being stood down. The talent was obvious from school days at Methody, the goal kicking firmed up each year while his passing range and improving game management offered Schmidt the ideal understudy to Sexton when Ian Madigan moved to Bordeaux in 2016.

Jackson and Madigan, who just guided Bristol into the England Premiership, combine for 55 test matches of experience which looks likely to be ignored by Ireland despite both men entering their prime. Sexton is the only Irish player to be recalled by Schmidt after joining a foreign club.  And anyway, surprise or not, Schmidt now has Carbery right where he needs him.

But for Jackson, like Olding, French living offers the opportunity to rebuild a once hugely promising career albeit on a radically different course.