Irish squad enjoying plenty of down time on the Gold Coast

‘Some went to the water park, which was good craic. Another group went jet-skiing’ 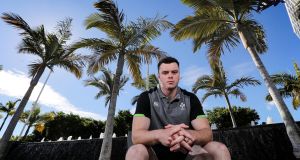 James Ryan says the Irish squad have been enjoying their time in Australia so far. Photograph: Dan Sheridan/Inpho

Far from the madding crowds in their luxurious base at the Royal Pines Resort on the Gold Coast the Irish squad have been enjoying plenty of down time as they overcome the jetlag from their long haul to Australia.

Having no doubt covered much of their detail last week in the Carton House, the squad only had their first full training session today (Tuesday) either side of two down days following their arrival on Saturday night.

Aside from the golf course at Royal Pines, which is the annual home to the Australian PGA championship, there have also been plenty of other activities for the players to enjoy before they move up to Brisbane in readiness for Saturday’s first test there against the Wallabies at the Suncorp Stadium.

The Gold Coast is a major tourist destination, and although this is their winter off-season, temperatures have reached around 20 degrees under largely cloudless skies since the squad’s arrival.

“This is an amazing resort,” admitted James Ryan. “We trained on Sunday and we’re training again today but yesterday we had a day off and some of us went to Wet and Wild, the water park, which was good craic. Another group went jet-skiing, so we got out and about to see the spots.”

“We have another down day tomorrow so I think I’m going to go to the wildlife park, see some koala bears and stuff like that. I’ve never seen them and they look pretty cool, so that’s the plan.”

As for the jetlag, Ryan says he has been coping “pretty well actually”, and added: “We had a strategy in place to combat the jet lag as much as we could. I was in the first group, so on the first flight we were told to only sleep for 90 minutes and then the second flight we could sleep as much as we wanted.”

I’m rooming with (Dan) Leavy, so we’re waking up a bit alright but it’s nothing major really.”

For all the fun and non-rugby activities, today’s session cranked up the anticipation for the first test, and with it an appreciation that the Wallabies will present an altogether different proposition than Ireland have previously faced in Ryan’s unbeaten pro career thus far.

“They’re the last team that’s beaten the All Blacks, they beat them in the last game in Suncorp Stadium,” said Ryan in citing the Wallabies 23-18 win in Brisbane last October. “So we’re expecting an incredibly tough Test match. We will be tested and we’re excited but aware of the threat that they pose.

“Like every good Aussie team, they like to play with the ball in hand a lot. They’ve got some serious outside backs and guys in the centre, guys like Kurtley Beale, Tevita Kuridrani, Marika Koroibete, Israel Folau. If they get front foot (ball), they’ll be really hard to stop so there’s plenty of talent there in the backline that we’re going to have to do our best to shut down.”

As for the Wallabies’ pack, Ryan said: “You just look at their front row, Scott Sio and Kepu, who are two of the best ball-playing props around. They’ve got guys like Adam Coleman, Izack Rodda, who’s a young second row who is going very well.”

“Throw in (David) Pocock and (Michael) Hooper, two of the best back rows around. We’re talking about their backline but their pack is just as strong. It’s a massive challenge for the guys selected this week to front up in that area and deliver.”

There’s a strong possibility that Joe Schmidt and his coaching staff will look to freshen up the Grand Slam-winning team and delve into the 32-man squad over the three-match series, while perhaps also making a few alterations to their game.

“There’s always a sense of things being tried and tested at the start of a campaign,” said Ryan, “whether it’s the beginning of the November series or the beginning of the Six Nations. You’ve got your initial squad and then people are given their chances and it’s taken from there.”

“There’s a squad of 32 here and plenty of talent and I’m sure most guys are going to get an opportunity at some stage. There is a sense of people wanting to put forward a claim.”

One of the two uncapped players in the squad, Tadhg Beirne, also seems sure to feature sooner rather than later, and Ryan has been impressed by what he’s seen, both as an opponent and now in training.

“He’s a real athlete, he’s incredibly good over the ball but also his handling skills, his ball-carrying, his work rate. They’re all top class so he’s a brilliant addition to the squad.”