Ireland comfortable as favourites ahead of Australia clash 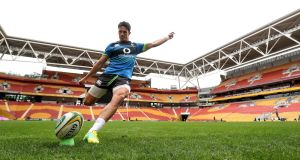 Joey Carbery practices his kicking during Ireland’s captain’s run ahead of the first test with Australia. Photo: Dan Sheridan/Inpho

In addition to an imposing Grand Slam, only the third in Irish history, the bulk of this high-achieving Irish squad have also broken new ground with that historic win over the All Blacks and beating the Springoks in Cape Town. But this is new territory again, offering that relative rarity in the modern game, and with it an altogether new challenge on the road to next year’s World Cup.

This was put in perspective by Peter O’Mahony on the eve of only his fourth and biggest Test as Irish captain, when he reminded us he hadn’t been on an Irish tour since captaining his country in the Americas in 2013.

“We’re playing one of the best teams in the world in their own back yard, which we haven’t done in a long time (2010). You look to 2013, we got a hiding in the Aviva and the last two games there have been one-score games. So, it’s always been close and it will be a different animal playing them here.”

By this he meant the physicality, speed, strike plays and width the Wallabies will seek to bring to the party. Australia’s Super Rugby teams have turned a corner and players like the Waratahs backs, Bernard Foley, Kurtley Beale and the returning Israel Folau (who, like David Pocock, missed their end-of-year tour) have hit form; witness the Waratahs’ 52-41 win over the Reds last Saturday.

That involved 13 of this match-day squad but, conceivably, a 15-try, record 93-point Australian Super Rugby derby not ideal preparation for a test match against this Irish machine.

Although re-jigged, much of this squad are coming off the back of knockout, end-of-season cup rugby. Historically, that hasn’t always been a help, but under Joe Schmidt, with an additional week to prepare, Irish squads have generally started new test windows well.

With O’Mahony himself and Devin Toner, the Irish pack will look to impose their set-pieces on the Wallabies, who have no obvious lineout option in the back-row.

Discipline has been a Wallabies’ issue under the fiery Cheika, who has accepted some of the blame for them becoming the most penalised team in the world’s top ten. They were blown off the park in the World Cup final by Nigel Owens, and Owen Farrell kicked 15 penalty goals in England’s 3-0 series win here two years ago.

This has brought into sharp focus by Ireland’s discipline, conceding only 34 penalties in their five Six Nations games, whereas Australia were penalised 62 time in their last five games of 2017. Cheika says they have been working on “some little techniques to reduce penalties in the some key areas.”

The benches are liable to have a bigger impact than is even normally the case in this modern era of 23 v 23. Ireland’s is loaded with quality and experience in the shape of Cian Healy, Sean Cronin, Tadhg Furlong and Johnny Sexton, and has 271 caps in total. But the Wallabies is sprinkled with savvy too in Rob Simmons and Nick Phipps, and Cheika is clearly looking to unload some oomph given his 6-2 split features props Allan Alaalatoa (120kg) and Taniela Tupou (134kg) and back-rower Lukhan Tui (117kg).

So Quinn Roux could be made for this endgame, although that’s some ballast to be springing in the last half hour or so, with the Wallabies perhaps hoping that their early season freshness can enable to see out the game more strongly than an Irish side pitching up after a long season and a long haul here.

But in making seven personnel changes and two positional, the Wallabies are trying out yet some more new combinations in the front-row and back-row, and have had only six days to prepare. Even with half a dozen changes, Ireland look more settled and more sure of what they’re about, and if needs be, the insurance policy of Sexton to see them home.

1 Shock at golf clubs as sport faces shutdown in Level 5
2 Fresh faces and renewed appetite: Is this a new era for Irish rugby?
3 Colin Byrne: Hard to understand how golf has become the bogey man now
4 Level 5 golf shutdown: Ireland one of few countries to close courses
5 Andrew Porter fronting up to responsibility of starting Ireland role
Real news has value SUBSCRIBE