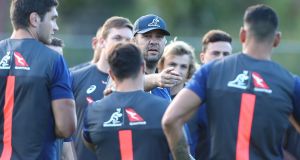 Australia coach Michael Cheika: ‘This squad has 11 members of the World Cup squad left, one third, which is about exactly where I thought we would be.’ Photograph: Chris Hyde/Getty Images

Michael Cheika is rarely less than good value and he was in vintage form as the Wallabies rolled into Kelvin Grove State College in Brisbane. Warmly greeting everyone as he and some of his players and staff came into the school’s main hall, he owned the room, fielding an array of questions from students and media alike with his customary alacrity. He mischievously made light of Johnny Sexton’s absence from the starting XV while maintaining the best Ireland side in history expects to win the forthcoming series 3-0.

Having the Wallabies, or in times past visiting Ireland squads, avail of the superb facilities at rugby playing schools is a feature of tours to Australia. Kelvin Grove was formed by the Queensland state government from an amalgamation in 2002. It’s one of the largest government educational institutions in Australia, catering for almost 3,000 students, and is located just 3km from Brisbane’s central business district.

Cheika heaped praise on the Suncorp Stadium – which he described as “one of the best stadiums in the world” and added “I can’t remember the last time we lost there” – the city of Brisbane, its people and the Ireland team in equally measure.

In the week of the first State of Origin rugby league showdown, he was asked whether he supported Queensland or New South Wales, where he was born, cut his rugby teeth with Randwick and coached the Waratahs to their first Super Rugby title in 2014.

“Ooh,” he groaned, “straight to the core.” Reminding his audience of his New South Wales coaching days, he nonetheless maintained that the Wallabies represent all of Australia. “When we [the Wallabies] run out in Queensland, we’re all Queenslanders. On Saturday, I’m definitely a Queenslander as well.”

That, along with every other answer, earned a round of applause.

Cheika’s incendiary reactions to perceived injustices from officials are riotously entertaining in their own right, and when asked if he ever lost the plot in the coaches’ box, he struggled to keep a straight face.

“Yeah, maybe the odd occasion,” he said, and while he tried to stay focused, particularly when his team was behind, admitted: “It’s part of my personality, and you can’t pretend who you’re not in life.” He then jokingly feinted to wipe the sweat from his brow.

Switching easily to live and television interviews, and then to the print media, he was equally relaxed. Joe Schmidt would later be evidently perturbed that his selection had been leaked before their training session in Brisbane, but when Cheika was asked if he was surprised that Sexton might not be starting, said: “Oh, is that the word? Maybe not, maybe they want to give him one rest, maybe that was the deal to have a rest and play a couple.

“Mate, you’d be a brave man telling Sexton he wasn’t playing. I tell you right now, I had to deal with him for a few years, telling him he wasn’t playing, he almost ripped my head off every time,” said the former Leinster coach with a laugh.

“The other lad [Joey Carbery] is a fine player. I’ve seen him play a lot on telly and live. He’s got a real skillset. To be honest, I don’t think Johnny will be keen to give him the chance to play either. So, look, whatever it is that’s the way it is. To us, the focus is about ourselves as it is in rugby all the time. You’ve got to do your best and see how that presents against the opposition’s best.”

He explained his reasons for describing this Ireland team as their best ever. “The consistency of the way they play, they’ve got a lot of self-belief. They’re coming here believing that they can win 3-0, no doubt about it from what I’ve read and seen, and that’s how it’s different.”

“It’s funny, I was sitting in Twickenham watching the game against England and I had my hat down and everything, there were Irish people everywhere. There were these chaps from Munster next to me, drinking beers and having a great time, right? And then they worked out who I was and they were into me and having a great time. After the whistle, I said: ‘Aw, you chaps will be favourites coming down to Australia after that’ and they were like: ‘don’t be saying that, no way, we can’t be favourites!’” said Cheika, in his best Limerick accent.

“That’s what’s different, this team has got a lot more self-belief around coming here and will believe that they’ll be able to do it. For us, we’re looking to become a great team together and show the opposition what we’ve got as well.”

Since reaching the World Cup final under his watch, the Wallabies have won 13, drawn two and lost 14, while blooding 26 new players, and they need an upturn in results while continuing on their latest reinvention.

“We’ve done this on purpose and we’ve taken some risks in that way because you’re always playing against great opposition; England, Ireland, New Zealand, it’s on every week. Now I think we can start narrowing in on what our group is, getting them the games and you’ll see this year there’ll be significantly less debutants.

“There’s still a couple that are pushing through and next year there might be a couple, only a couple realistically, but get more experience, lift the cap level up, lift the age level up but at the same time, every time we run out in that gold jersey we’re representing Australia and that means that the country is waking up the next day feeling how well we’ve performed, my own kids included. So that demands maximum performance. And then with that I believe we can win.”

He believes the Wallabies are getting there.

“I think we’ve got the right mix. This squad has 11 members of the World Cup squad left, one third, which is about exactly where I thought we would be. You’ve got to be careful this stuff doesn’t become a self-fulfilling prophecy, like ‘it’s going to happen so I’ll make it happen’. We haven’t done that.”

“We’re still looking at other options as well but I can see a good young generation coming through here in Australia.

“It’s a good opportunity for us to build a new look for the game as a whole and make sure the Wallabies are what people think about when they think about rugby in Australia and maybe not some of the other stuff that’s going on,” he said, no doubt relieved that the Wallabies are back on the pitch after recent off-field controversies.