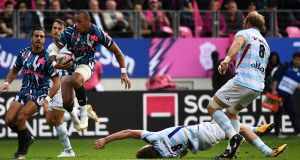 Donnacha Ryan enjoyed the bragging rights after Sunday’s Parisian duel in the French Top 14 as he helped Racing 92 to a 17-16 victory over a Stade Francais side, whose coaching team includes a couple of Ryan’s former team-mates in Mike Prendergast and Paul O’Connell.

Ryan played 53 minutes before being replaced by former All Black Dominic Bird but Racing had to manage without an injured Simon Zebo.

In a tight affair Racing held an 11-10 lead at half-time with both sides only managing a brace of penalties apiece in the second half. Despite the victory, Racing remain a point behind Stade Francais in third place and are five adrift of leaders, Clermont Auvergne.

Elsewhere in the Top 14 ex-Ireland and Ulster outhalf Paddy Jackson kicked two penalties and two conversions in Perpignan’s 23-20 defeat to Montpellier at the Stade Aime Giral, the home side’s only consolation in defeat, a bonus point.

Former Shannon and Munster players Paddy Butler wore the number eight jersey in Pau’s 28-25 victory away to Agen, for whom Dave Ryan was the starting tighthead prop.

In the Pro D2 in France, Stuart Olding’s impressive form for Brive continued as he ran the game from outhalf according to newspaper reports in a 36-14 victory over Aurillac.

Brive, who are coached by former Ulster, Ireland and Lions secondrow Jeremy Davidson, lie fourth in the table, albeit on the same number of points as the second- and third-placed clubs, Nevers and Carcassonne.

The 23-year-old Dungarvan native and ex-Munster academy player Sean McMahon was a try scorer from fullback in Carcassonne’s 47-13 win over Beziers for whom Jamie Hagan remains their first choice tighthead prop. John Madigan started in the secondrow for bottom-of-the-table Massy but the home side were well beaten 21-6 by Vannes.

In the English Premiership ex-Ireland under-19 Sevens international Callum Sheedy, filling in for Ian Madigan in the Bristol Bears number 10 jersey, scored 15 points but couldn’t prevent his team from going down 45-40 to the Northampton Saints at Ashton Gate.

Given the landslide of points it’s reasonable to assume that Bristol’s defence coach, John Muldoon won’t have been enamoured. The former Connacht and Ireland international, who retired from playing last summer to take up a coaching role under Pat Lam at Bristol (Conor McPhillips is the attack coach to extend the Connacht old boy network further), will be demanding a much improved effort.

Gareth Steenson converted all four Exeter Chiefs tries in their 28-11 victory over the Worcester Warriors. Ian Whitten started in the centre while one-time Ulster academy prospect Michael Heaney came off the bench for the Warriors.

Charlie Mulchrone was a replacement scrumhalf in Harlequins last-gasp 27-25 victory over Gloucester at Kingsholm, their second win of the season.

Former Ireland U-20 hooker Dylan Donnellan is certainly not afraid to travel in his pursuit of a rugby career.

The Galway-born, Clongowes-educated prospect represented his country in the Junior World Championships in New Zealand (2014) and was a member of the Leinster academy while at UCD.

He played under Eddie O’Sullivan at Biarritz, staying there for 18 months, and then returned to play club rugby. While training with Leinster during the summer he came under the watchful eye of Stuart Lancaster. When an injury blight struck Lancaster’s home club, Yorkshire Carnegie (who play in the IPA Greene King Championship in England), he recommended Donnellan.

A second-half replacement at the weekend, he couldn’t prevent Carnegie from going down 36-19 away to the Jersey Reds for whom Jerry Sexton, a brother of Johnny, scored a try. Brendan Macken scored a try in London Irish’s narrow victory away to Coventry.

Speaking of hookers, another Ireland U-20 international, Tadhg McElroy, who is on loan from Saracens to the Bedford Blues, darted over for a try in a 26-23 defeat to London Scottish for whom Charlie Ingall played on the right wing. Sean McCarthy was at loosehead prop for Bedford.

Shane O’Leary kicked five penalties and Sean Scanlon got the only try of the game in Nottingham’s 20-15 victory over the Doncaster Knights. It was Nottingham’s third win in succession and the two Munster-born players were joined by fellow Irishmen Oisín Heffernan, Danny Qualter, Jordan Coghlan and Shane Buckley with Rory Burke and Gearoid Lyons on the bench.

David Johnston, a brother of Munster outhalf Bill, was replaced after 25 minutes for Ealing Trailfinders in their 41-35 win with former Leinster Academy and Bristol player Jack O’Connell at loosehead prop while ex Ireland Under 20 international and Leicester Tigers tighthead Ben Betts came on as a second-half replacement.

1 Betting shops face uncertain future as they prepare for Monday reopening
2 Tianna Bartoletta: ‘After you’ve gotten your medal, you become black in America again’
3 Kameko shocks Pinatubo in 2,000 Guineas at Newmarket
4 Sideline Cut: Marcus Rashford proves himself a leading man off the pitch also
5 Ian O’Riordan: An education in race and running during college days in America
Real news has value SUBSCRIBE