Sponsors can toast being winners in Champions Cup U-turn 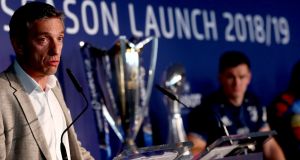 Back in 2014, when the unholy alliance between the English and French clubs were hell bent on dismantling the Dublin-based ERC, long established organisers of the Heineken Cup, amid all the threats and brinkmanship there were assurances of a brave new dawn for European club rugby which would see its flagship competition emulate its footballing equivalent, the European Champions League.

To that end, the Bath chairman Bruce Craig and Premiership Rugby CEO Mark McCafferty, loud exponents of that Anglo-French alliance, avowed that the Heineken Cup would be no more and that in its stead, a la the European Champions League, there would be five “commercial partners”.

Four years on, and entering the fifth year of the re-branded, remodelled competition under the new, Swiss-based organisers EPCR (whose offices moved from Neuchatel to Lausanne in the summer) and it is the Heineken Champions Cup. In the ongoing absence of those “commercial partners”, save for Turkish Airlines for three years, the beer brewer is the title sponsor once more.

Furthermore, having previously been paying €10-€12million for the right to be title sponsors pre-2014, it is understood that Heineken are paying €8 million per season now.

Had ERC – roundly criticised for failing to maximise the commercial potential of the Heineken Cup – presided over a reduction in the title sponsorship they’d have been roundly pilloried by the very same Anglo-French axis and their apologists.

Indeed, at face value, reverting to a title sponsor – and the very same one at a reduced price – after the failure to fulfil commercial goals looks like an admittance of failure, although the EPCR director general, Vincent Gaillard, maintains otherwise.

“Honestly, no, and I’ll qualify that,” said Gaillard who, admittedly, would have to say that and only came on board, so to speak, in 2015. But he did concede: “Is it taking much more time than we would have liked? Yes. Have they over-promised? Yes, they have [but] now these partners will come, I have no doubt, and for a single good reason. For them to come, required first that we build the right TV platform and now, finally, we have it.”

This is in reference to BT Sport assuming the role of EPCR’s principal broadcast partner in the UK and Ireland, with one free-to-air game transmitted on each weekend on Virgin Media in Ireland and Channel 4 in the UK, as well as France Television, not to mention NBC in the Unites States, with broadcast deals for free to air coverage to be agreed in Italy, Japan, Canada, Germany and others. So, for better or for worse then, at least there’s more clarification for television viewers.

“It was very hard to even conceive, and we tried hard, of having new (commercial) partners and quality brands because it was split coverage in the UK and Ireland, with no free-to-air in Ireland,” said Gaillard with regard to the last four years, when the coverage was shared between BT and Sky.

“Now we have that, I’m pretty certain that our level of exposure will increase and that will naturally bring in more partners. So ultimately, we will have a multi-partner model. I have no doubt. It is taking time, unquestionably.”

As to a time frame, Gaillard said: “If we bring those four or five partners in this year or next it will be a very good achievement.”

Heineken were warmly welcomed back like old friends at yesterday’s seasonal launch for the Pro14 clubs at the Aviva Stadium. Except, of course, Heineken had never been away since the tournament’s inception in 1995, save for the 1999-2000 season.

This year’s European finals will break new territory when they’re held in Newcastle on Friday, May 10th, and Saturday, May 11th, at St James’s Park. Already, 30,000 tickets have been sold for the showpiece final, leaving only 9,000 to be sold pending allocations for the two finalists.

At next Monday’s French launch in Toulouse, EPCR will announce their choice of venue for the 2020 final, which is expected to be the Stade Vélodrome in Marseille. A final in Italy is desired, but as of yet there has been no formal proposal from Rome.

Allowing for “the price of accommodation”, last season’s final weekend in Bilbao was regarded as “a big success” and whetted the appetite for reaching out beyond the six founding countries. “We have a few candidates for 2021 which are in the same type of sphere, Amsterdam and a few others,” said the EPCR director general.

No less than rumours of a reduction from 20 to 16 participants – rumoured to be mooted by the English clubs – Gaillard ruled out any notion of South African clubs qualifying through the PRO14 any time soon.

“We’re not any closer to it, no. As much as we heard clubs expressing an interest, the subject has never been discussed around our executive committee or boardroom. Never.”