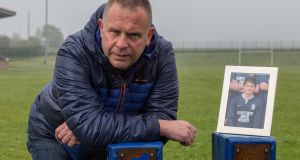 Peter Robinson with a photograph of his son Benjamin. Photograph: Stuart Wallace

Legal fees in a case regarding Benjamin Robinson, who died from brain trauma during a schools rugby match in 2011, are threatening to drive the Robinson family into financial difficulty.

Peter Robinson, Benjamin’s father and an advocate for highlighting the dangers of concussion and second impact syndrome, the name given to the sequence of blows that killed his son, has said the years since his death have been a battle that has taken a toll.

“I just wish it would come to an end. For a family we feel we have been fighting for seven years,” said Mr Robinson.

“When we went to the coroner’s inquest the school had a barrister. So rather than us representing ourselves we had to have a solicitor, and we had to pay for that. You have lost your son, which money will never replace. But also you have the cost for hearing the truth. You feel like you are getting hit from all angles.”

On January 31st, 2011, Benjamin Robinson was playing rugby with his school Carrickfergus Grammar. The 14-year-old suffered three head injuries and returned to play each time. He later collapsed and died in Belfast’s Royal Victoria hospital from a fatal brain injury.

At his inquest the coroner determined that his cause of death was second impact syndrome due to head injuries sustained during the match. The family’s legal team gathered further evidence, largely from a video taken of the match, confirming that Benjamin’s death was due to the syndrome and was preventable.

The family, through mother Karen, subsequently issued legal proceedings in Belfast High Court against a number of rugby institutions and two individuals.

The Irish Rugby Football Union (IRFU), Ulster Rugby, World Rugby, Carrickfergus Grammar School, the coach of the school team Neal Kennedy and referee David Brown who officiated at the match, all named in the writ, are contesting the claims made by the Robinson family.

The vast resources available to the institutions overshadows those of the Robinsons. From the beginning of the inquest the costs began to mount, forcing Peter Robinson to sell valuable family heirlooms, including first World War medals won by his grandfather.

“I had to sell my granddad’s collection of medals for the legal costs. It was the 100th anniversary [of the war], and I had a cousin contact me because he was going to the battle field. I was ashamed to say I had sold them. Absolutely ashamed. But I had no other way of financially covering the costs.

“We went to a coroner’s inquest expecting to hear what happened that day, and we were met by the school barrister. All of a sudden you realise it was a contest.”

Benjamin’s is the first case of its kind to be taken in Ireland concerning a death due to second impact syndrome. The coroner’s statement also stated that there were numerous opportunities for those in charge to notice that Benjamin had sustained several concussive-type head injuries.

In a statement released shortly after proceedings began, the family said it was their case that the school, the IRFU, the Ulster Branch and World Rugby were in charge of disseminating information with regard to the risks of concussion in rugby, and therefore the coach of the team and the referee should have been aware or should have had the means of being aware that concussion is dangerous and could result in death.

“We’ve been battling, and I suppose we are getting used to trying to deal with the big guys,” said Robinson. “We met the IRFU and they [named official] said you can’t have mandatory training in concussion, it would drive off the volunteers. I’m a volunteer.”

He believes there is a long way to go before culture changes on the issue. Yet the family’s sense of determination to follow through has not been weakened by the strain. They are not about to give up.

“We have talked about crowdfunding if this goes wrong,” said Robinson, who is promoting Sport Northern Ireland’s new website Concussion NI.

“People are talking about losing their houses here to get it through. We as a family owe this to Ben. It was never Ben’s fault. I love rugby and it gave me a lot, but it also took a lot away. I love rugby, but I love my son more.”